Picked up a few things the other day: 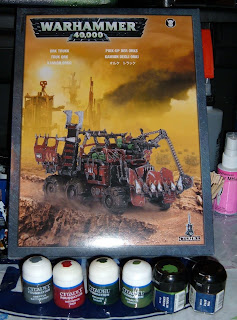 a Trukk & some paints (more greens, mostly). Speaking of green, I guess I'm ready to start my Ork army, 'cause I've got a LOT:

I'm eager to start my Orks - I think it'll be neat to build an army that I already have most of the models in front on me, not one that I bought piece-by-piece as I went. I finally dug out the box of stuff I got from Craigslist last year - the contents:

...add that to the stuff from the AoBR box I haven't painted yet:

...and the stuff I ordered when I bought the Trukk:
-Painboy
-Ork in Mega-Armour w/ Kombi Shoota-Rokkit Launcher
-'ard Boyz Armour Pack

...now, I don't know squat about list building - I never play in tournaments, and can count the number of games I've played in the past year on one hand. I'm primarily in it for the painting. But I'm actually really looking forward to playing some games with these models, just because they're so different from what I'm used to.

As far as in-progress stuff, the Scout Squad will hopefully be done tomorrow, I'll have pics when it is. I got the magnets in for Grind, so that needs started too. I've actually got a hug pile of stuff to be sealed & stuff to be primed, but we've been stuck with sticky, nasty weather for a few weeks now, and the forecast looks like this: 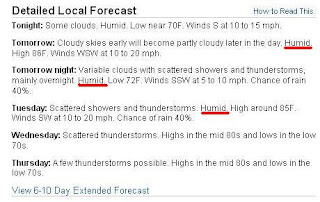 Wonderful. I was seriously considering brush-on sealer & primer just so I could finally knock some of these projects into the "finished" category, but I've had inconsistent results with those in the past, so I guess I'll give it 'till the end of the week...
Posted by BigPaul1e at 1:30 AM