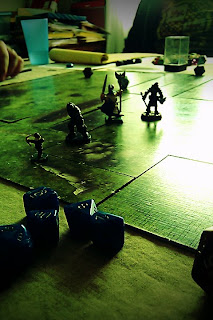 Had a D&D game on Sunday, and got a chance to play with my new cleric.  It was pretty laid back (we lose one of our regular players to football season every year, and another plays via webcam and wasn't able to join us, so it was just three of us + 1 NPC and the DM).  It just occurred to me that it was the first time in a loooong time that I've actually played with a model I painted.

In other news, the Tyranids from my copy of Space Hulk are pretty much done, and ready for clearcoat: 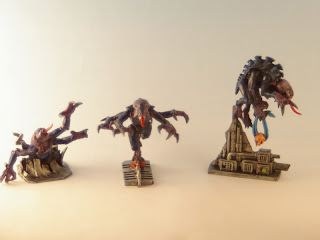 ...I'm gonna do my best to finish painting the Blood Angels in the next couple of weeks, since my wife is going out of town later this month - some of the guys have been talking about having a board game day, and when I mentioned that I miiiiight be finished with Space Hulk in time, some ears definitely perked up.  It's iffy, since the Blood Angels are a LOT more detailed than the Genestealers (which took me a month), but I also plan to use the airbrush a lot more, so hopefully that will help.

I also got my awesome Pirate Ork Heads from MaxMini: 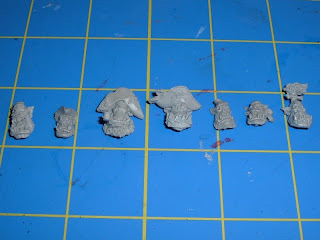 I was seriously chomping at the bit to get these - I haven't checked the mail so much since I was a kid and used to send away for stuff with cereal box tops.  Literally an hour after I emailed Przemek at MaxMini to tell him I was ready to give up hope, I got a package slip from the post office.  Needless to say, I was standing outside the post office at five minutes 'till 9:00 this morning, waiting for them to unlock the doors.  They look absolutely fantastic & line up perfectly with the GW models, so now the Freeboota conversions can begin in earnest.  Stay tuned!
Posted by Unknown at 1:04 AM