Based on Lars4life's review, I picked up a couple of the Gale Force Nine T.A.C. templates:

I got two so I could throw one in each of my (currently used) army bags - eventually my goal is to have a complete set of templates, dice, tape measure, etc., in every army bag I have, so all I need to do is grab the bag with my books in it & the appropriate army case and hit the door, without having to worry if I forgot anything or having to move a bunch of stuff over from another bag.  To this end, I also picked up a Multi-Template Mk II:

This is pretty slick - I know I've criticized Gale Force Nine's "Hobby Scenics" line for being overpriced, but their "Gaming Aids" line includes a lot of cool, well-thought-out stuff.

I also picked up some spare dice: 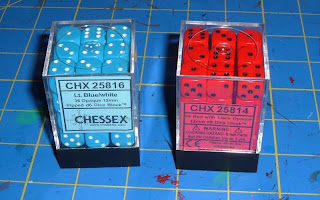 The Chessex 12mm dice cubes are cheap enough that I can add one or two to my order whenever I buy some stuff online, and it isn't too painful.  At some point I bought a bagful of scatter & artillery dice, so a few of those will get thrown in each bag too...
Posted by Unknown at 4:00 PM