I picked up some new Fantasy models for my long-term Orcs & Goblins project the other day: 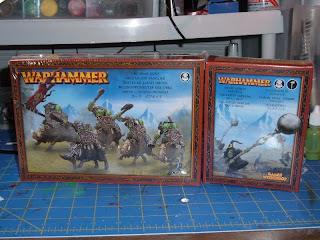 ...some Orc Boar Boyz & some Night Goblin Fanatics.  I mainly picked up the Boar Boyz because I remember when the models came out and I really liked the look of them, to the point where I seriously considered trying to find a way to work them in to my 40K Ork army.  Of course, right after I bought these, GW announced that there will be new Savage Orc Boar Boyz available next month.  (And I've been trying to intentionally hold out on Fantasy purchases until the new Orc book hits).

I bought the Night Goblin Fanatics mainly because I was reading about how they play, and the unit sounds like a ton of fun.  What funny is that after I put the models into my "to do" pile, my wife came into my studio one night while I was painting - she saw the Fanatics and said "*gasp* Are you building Goblin Witches?!?  Cool!!"  (she thought "witches" because of the Fantaics' pointy hats, you see).  While she's always been supportive of my hobbies (she's a gamer herself), the sci-fi "flavor" of 40K has never appealed to her - she's always been interested in fantasy novels, movies, etc.  I might have to paint up the Dwarfs from the Skull Pass box and see if she want to try a game someday...
Posted by Unknown at 4:00 PM

Email ThisBlogThis!Share to TwitterShare to FacebookShare to Pinterest
Labels: Fantasy, On Deck, Orcs