Made a LOT of progress on my Orks the other day: 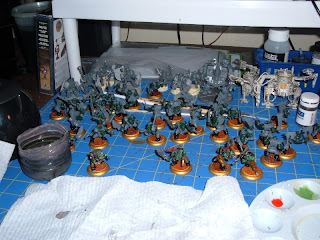 See, I work odd shifts, but usually I flip my schedule around on the weekends so I can hang out with the wife (I know, I know, that's exactly what they tell you not to do).  But actually, it works pretty well for me - I just take a nap for a few hours before going to work on Monday evening, and all is good.  Well, I knew I was going to have to be out later than usual on Tuesday morning, so I stayed up all night - and painted for seven hours straight.  The pic doesn't look like a lot of progress for seven hours, you say?  Well, here's the deal: I took all the Ork Boyz & Nobz that I currently had built (around 50 of them) and decided to mount them on my Freeboota Bases.  The problem was, since the bases are already painted, I didn't want to mount them and risk getting paint on the finished bases - so, I had to prime the Orks, paint their boots, then mount them to the bases. The other problem was that since it was 35 degrees and raining I couldn't use spray primer, and since it was the middle of the night and my wife was sleeping, I couldn't run the airbrush compressor - so that meant brush priming.  When I prime by brush I'm terribly paranoid about putting it on too thick, so I usually do two or three thin coats - and, since these models weren't on bases, I could only prime one side at a time.  So, the priming, boot painting & mounting probably took 4-1/2 or 5 hours by itself.  The only other real work I managed was getting all of the skin basecoated, but that's the lion's share of it for Orks.  I picked out three of these models that I needed to complete a unit of Boyz that I've already finished, and I am currently deciding what to do with the rest - originally I was planning to give each unit a different color scheme - some units with striped pants (a la vintage Hollywood pirate movies), some with freehand work across the unit, etc., but I have to admit that I'm considering just cranking them all out in a single color scheme for simplicity's sake.  Or, I might do the Nobz with a little more variation, since I'm only going to be running them five to a unit...
Posted by Unknown at 4:00 PM