I finished up a pair of Ork Boyz with Big Shootas for my Freebootas the other day: 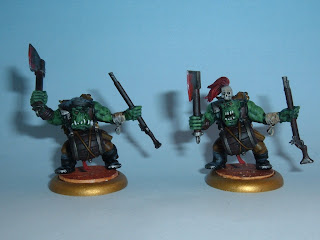 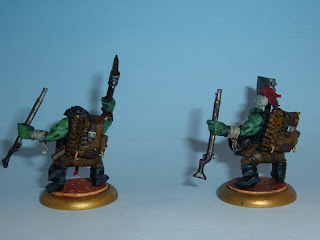 I gave them Imperial Arquebuses from Freeboota Miniatures (appropriate, no?) for their Big Shootas.  Since these models were originally 'Eavy Weapons Boyz, they had a big "socket" molded on the front of the torso for the originally included machine gun to snap into.  I had to disguise this somehow, so I used some barrels from a Fantasy Ogre Kingdoms sprue.  I figure it can represent a powder keg, and I think it works pretty well with the backpack...
Posted by Unknown at 4:00 PM