Saturday we woke up and munched on some food we brought with us for breakfast.  I had a chance to look through the Grey Knights codex at that point, and had seen enough to decide that I wanted to do a low-model-count Grey Knights army (mainly because lars4life kept saying the codex was "ridiculous" and "broken", so of course now I want him to have to play against it).  ;-)  I headed over to the concourse and picked up the bulk of it: 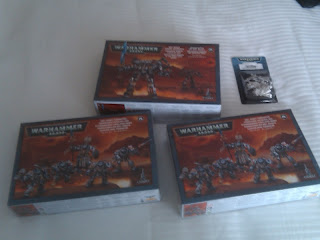 Lord Kaldor Draigo, two boxes of Paladins, and a Dreadknight - I pretty much just need another Dreadknight, Inquisitor Karamazov and a couple of Dreadnoughts (I already have a Land Raider that will go with this army).

Lars4life had been hanging around the Privateer Press room and talking with the Press Gangers quite a bit, and he mentioned that if we took our Battlegroups to their room and played a game they would give us some free swag.  He had assembled his the night before, so I headed down and told the guys I was looking to put my models together.  They set me up with a hobby knife, superglue, pin vice & brass rod and I went to work.  While I was working a few tournament players who were waiting for their game to start came over and we chatted for a while.  After an hour or so I had my Protectorate Battlegroup assembled: 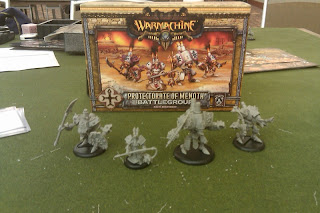 Noooo, the legs totally aren't backwards on that Repenter.  I would never make a silly mistake like that...

About this time I became evident that the snacks I had for breakfast weren't cutting it and I was starving - I ran back out to the concourse where the hotel had set up the lunch service and grabbed a sandwich.  After that we headed back up to the Press Gangers table and told them we were looking for a game - apparently they were doing the Battlegroup games as 4-players, but we waited for quite a while and nobody else looking for a game showed up.  They decided to go ahead and start us as a two-player game.  After a brief explanation of the rules we got started, and in the middle of turn one we needed a spray template - the Press Ganger helping us went off to look for one, and disappeared for twenty minutes.  Needless to say at this point I wasn't having the greatest time.  This changed pretty quickly, however, as I got a feel for the rules - I have to admit that by the end of the game I was having a blast!  It came down to Warcaster vs. Warcaster - lars4life won the game under the scenario rules, but for fun we played it out and my caster killed his (using a strategy told to me by the Press Ganger helping us - there's no way I would have known to do it on my own).  When we were done they gave out prizes:  They gave both of us a Prime Mk. II rulebook, tape measure, & dice!

Since I had bought the Prime Mk. II rulebook the day before, I went back to the vendor I bought it from, told them I had just won a copy, and asked if they'd let me exchange it if I put it towards something more expensive - they agreed, and I swapped it towards a Venerable Dreadnought for my Grey Knights army: 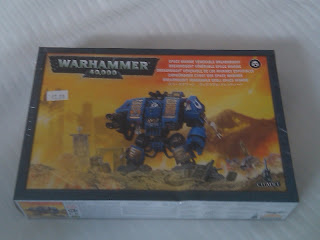 After running around for a bit, it was getting close to dinner time, so we headed over to Claim Jumper where we were served a ridiculous amount of food: 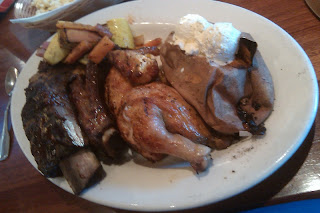 Lars4life picked up the tab as a birthday gift (thanks!)  We waddled back to car and headed to the con for our next class: Raising Your Game: Painting to a Competition Level with Chris Borer.  I had met Chris a couple of years ago when he was gracious enough to sit in for an instructor that was a no-show at a seminar at Origins.  This was a lecture-only class, and Chris passed around examples of his work to illustrate his talking points.  There was some very good info about composition and technique, and Chris' work is amazing.  His Fulgrim model from The Primarch Project is quite possibly the most gorgeous model I've ever seen in person.  I've heard that there are collectors out there willing to pay hundreds or even thousands of dollars for Golden Demon-winning models, and I always thought that was a ridiculous idea.  If that model ever came on the market, however, I would have to take a very hard look at my finances...

Sunday was a pretty slow day, as we were wrapping things up.  We got our stuff packed and ready to go, then went back to the main ballroom for a final pass.  The line was pretty much non-existent at the Forge World booth by then, so I took the opportunity to place an order for some Inquisition doors for the Land Raider that I'm going to use with my Grey Knights.  We  wandered over to the Black Library booth and found Dan Abnett and Nathan Long sitting behind the table, looking very dapper in their suits.  Lars4life realized that he had forgotten to bring any of his Black Library books with him for an autograph, so he grabbed a copy of Legion for Dan to sign. I had brought my copy of The Founding for him to sign: 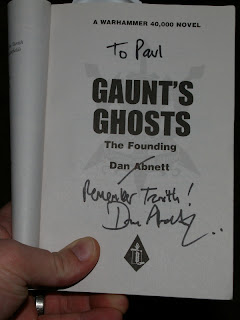 And, since I read most of my Black Library books on the e-reader my wife bought me for Christmas, I had the foresight to bring a silver paint marker and asked them both to sign the inside of the cover: 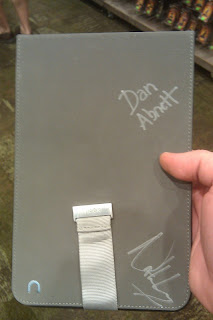 After wandering around a bit more and picking up a few more bits, we headed to our final event, the Black Library roundtable with the aforementioned authors: 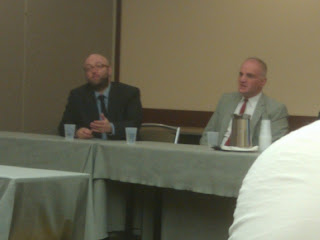 It turns out that SandWyrm was in there too, and he has a great recap at his site.  Needless to say that both authors were tremendously funny and charming, and even though lars4life & I were both exhausted and starving at that point, I gladly would have sat there for another hour and listened to more stories.  I'm a fairly new reader of the Black Library books, and now I have a lot more on my reading list!

After that we grabbed some lunch and hit the road for home.  Overall I had a great time at my first Adepticon, and we're already planning what we want to do next year!
Posted by Unknown at 4:00 PM