For the past year or so, I've seen a lot more people talk about using salt & hairspray to achieve a weathered/aged look for their vehicles - since I had a whole mess o' Ork vehicles waiting to be painted for my Freebootas, I decided to give it a shot.

To start with, you paint your model with what you want the "weathered" color to be (a rust color, in my case): 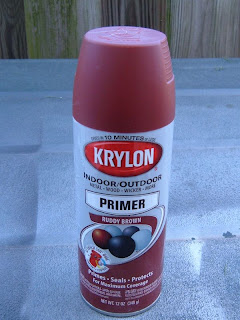 I used a can of Krylon "Ruddy Brown" primer - I think it was around $4 at Wal-Mart.  The label says it's for "Metal - Wood - Wicker - More".  Unfortunately it doesn't say anything specifically about whether or not it's safe for plastic.  I've never had a problem with Krylon in the past, but to be sure, I grabbed a model that I wasn't particularly attached to (a Warbuggy I got in a Craigslist lot): 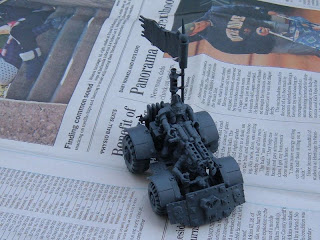 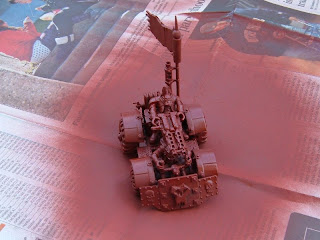 After spraying it & waiting for it to dry, I didn't notice any adverse effects - so I grabbed the rest of my models and let 'er rip: 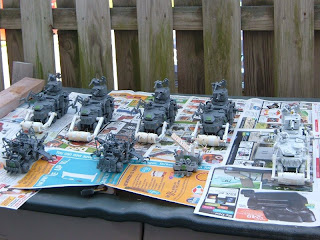 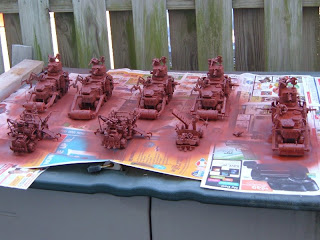 I sprayed them from several angles to get good coverage: 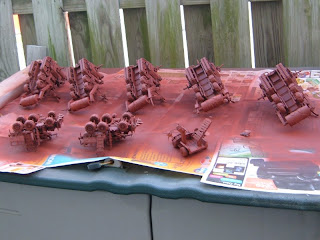 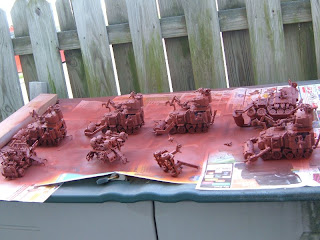 After they dried, I was ready for the next step: 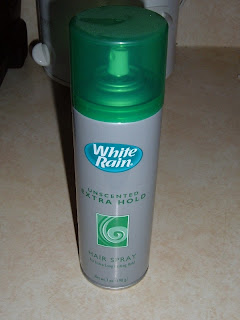 This was the cheapest can of hairspray I could find - I actually had to dig around to find a can that wasn't four dollars or more.  I finally found this one at the store on the very bottom shelf, in the corner, for 97 cents.

Then I grabbed some salt: 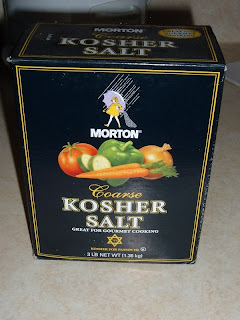 This was free, 'cause I grabbed it out of our pantry.  IMPORTANT: YOU MUST USE KOSHER SALT FOR THIS TECHNIQUE.   Regular table salt (AKA "iodized" salt) will not work.  Why?  Well, if you look at "iodized" salt under a magnifying glass, it looks like this: 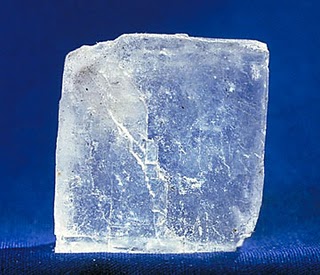 ...it's almost a perfect cube.  The shape of the salt is going to determine the pattern of the weathering - unless you live in a world where rust spots form in perfect geometric squares, it's gonna look terrible if you use iodized salt. 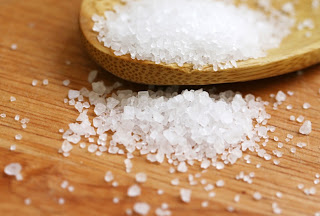 ...it's irregular, random-sized, broken pieces (this is due to how it's manufactured).  That's what we want.

I dumped some of the salt into a bowl to make it easier to work with: 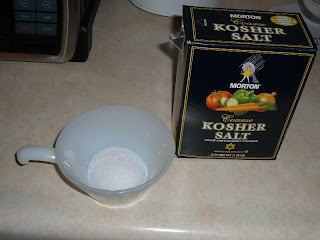 Then I sprayed my models with the hairspray: 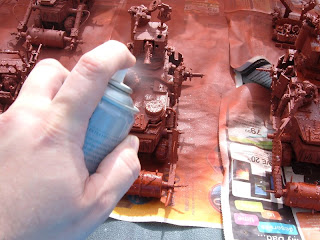 ...and sprinkled the salt over them: 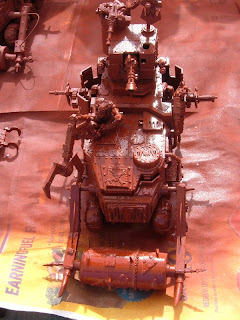 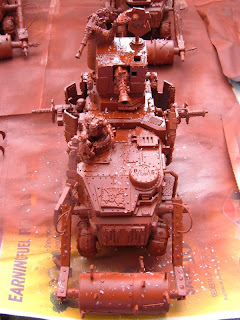 I worked in sections - I would do the tops of the models first, then after that dried, I did the sides, etc. 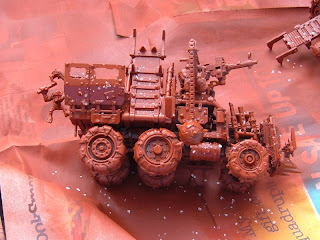 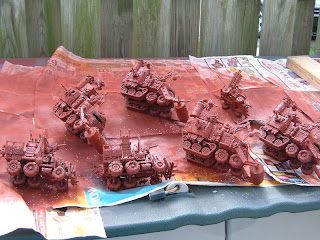 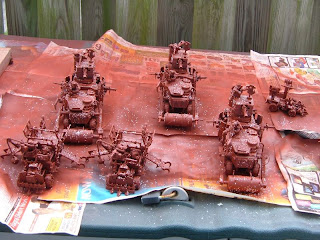 Then I gave the models a coat of GW Chaos Black: 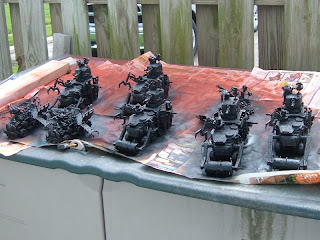 ...about this time, I heard something going on outside my patio: lawnmowers!  Crap!  The gardeners for my complex had come to mow the grass - threatening to get grass clippings all over my wet models!  I stood by until I was pretty sure the first coat of black had dried, then I rounded up the models and stashed them in my kitchen: 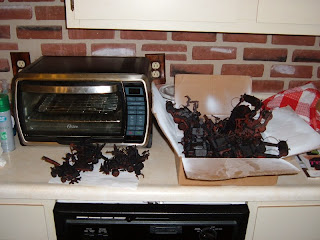 Later that afternoon after the gardeners had left, I took the models outside and finished spraying them black.  Again, I sprayed them from several angles to get complete coverage: 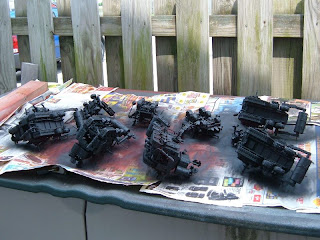 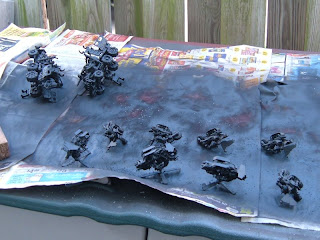 After the paint had completely dried, I took the models inside, held them under lukewarm water, and scrubbed the salt off with an old toothbrush: 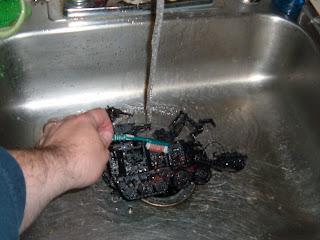 It will take a while for the salt to come off - it seems to be easier once the model gets thoroughly "saturated" with water.  (I have a suspicion that submerging the whole model in a bucket of lukewarm water would be effective, but I wasn't willing to try it).

Here's the result after the salt is scrubbed off: 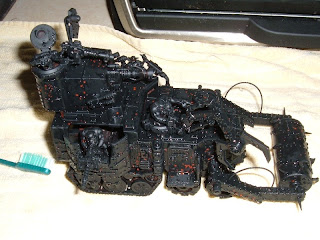 (click to embiggen)
...you can see that the rust-colored paint shows through where the salt was covering the model, leaving a "flaky rust" effect.

Some random thoughts on the process:

-It uses a lot of paint - I used two cans of primer & two cans of Chaos Black (of course, I did five Battlewagons, three Trukks, five bikers, three Deffkoptas & a Warbuggy).

-Getting all the salt off can be a pain - I scrubbed until I thought it was all off, let the model air dry, then had to go back again to get some spots I missed, and to get rid of the white, salty "film" that was left in some spots.

I wish I had used more salt - I read through several tutorials on the Internet beforehand, and a common mistake on the first attempt was using way too much salt, so I used it sparingly.  Unfortunately, I think I underestimated how much salt fell off while I was turning the model during painting, as well as their unscheduled trip back into the house, even with the hairspray holding it on.  There was one model where I was afraid that I used way too much salt, and it came out the best out of all of them.

-This is not a "one-step" solution to weathering; the model is going to need some traditional weathering done before I wam completely happy with it.

-This method can be kind of rough on your models - three or four of my vehicles needs parts re-attached that broke off in the scrubbing.

So would I do it again?  Probably, although this method is usually presented as a time-saving method, and if you're doing seventeen vehicles at once, it still takes a lot of time - pretty much my entire day off...
Posted by BigPaul1e at 4:00 PM