The Blessings of Papa Nurgle

I'm a gadget freak - tablets, smartphones, handheld gaming systems, GPS's, you name it, I've probably got two of 'em.  As such, it's usually easier just to buy a bunch of extra charging cables & adapters and leave them where I need them (in the bedroom, at work, in the car, at my painting desk, etc) than to remember to take one with me.  The good part of this is that you can usually get spare cables & USB adapters on eBay for pennies (as long as you're willing to wait for them to get here on a slow boat from China).  The bad part?  They're pretty flimsy - so  I've taken to patching them up several times before calling it quits.  I recently patched up a cable for my tablet with some red "gasket maker" silicone I had laying around: 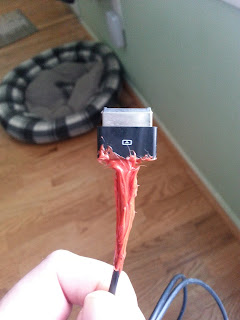 Good Lord, that looks digusting - I've never had a desire to build a Chaos army before, but I know what I'm using if I do...
Posted by BigPaul1e at 6:30 PM No comments:

The Privateer Press Machinations League rolls on - I missed week #2, and week #3 didn't look promising when I pulled in to the game store - it appeared to be deserted when I pulled in (I'm guessing because of the terrible heat wave we're having here, and the A/C in the game store isn't fantastic).  Luckily after a bit some people started showing up, and Funderhammer and I decided to play a 25-point game (with league play, you get more points for playing a new opponent, playing a new faction, playing at a point level you haven't played at yet, etc).  It had actually been quite a while since we had played each other, and I had a few new models I wanted to try (my Torch warjack and my Great Bears). 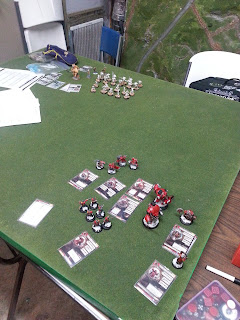 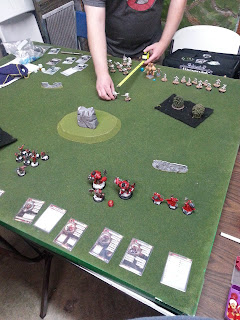 Overall, it was a fun game - ironically, I picked almost all of my ranged units in my Khador force, while Funderhammer picked an almost entirely melee Retribution list.  The aforementioned Great Bears charged into combat and were quickly outnumbered: 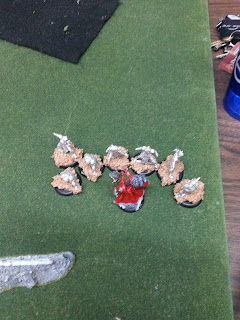 Surprisingly one model survived the first round of combat, and went on to take out two of the opposing unit before being wiped out.

Happily the Torch did great - after getting locked up in melee the entire game the last time I tried to use him, he got to do everything I wanted him to this time.  In the end it came down to whether I wanted to run The Butcher in for an assassination run on his caster, or try to get his caster with the Torch's spray template.  The Butcher was getting dinged by feedback every round, so I took the free strikes and was able to get his caster under my template - with The Butcher's feat and a focus boost, Torch did D4 damage and came away with the win!
Posted by BigPaul1e at 6:30 PM No comments:

Finished Painting my Great Bears of Gallowswood that Funderhammer got me as a birthday gift at Adepticon this year: 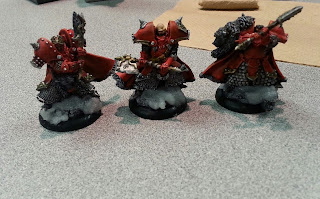 These are the first mini's I've painted in a loooong time - well over a year at least.  (Well, actually, they're not the first, but the other one came out so bad I'm ashamed to post it here).  These are the first ones where I felt like I was started to get some of my chops back, anyway.  Looking forward  to using them in a game...
Posted by BigPaul1e at 6:30 PM No comments:

...so lars4life is the Pressganger at our local game store, and has been running events for a while - I've been meaning to get to some of them, but my graveyard-shift job makes it difficult.  I decided to wake up early and try playing in the Machinations: Entropy league.

After meeting everyone, a player named Matt asked if I wanted to get in a game. I warned him that I hadn't played much, as I was primarily in it for the painting & modelling - if he was willing to put up with me stumbling through the rules, I'd be happy to play.  It turns out that he was playing a new army for the first time, so he didn't mind.  After setting up terrain, we got down to it. 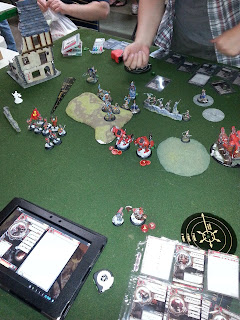 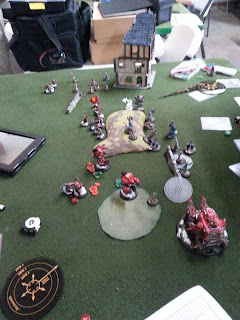 Matt was playing a Cryx army - I used my typical strategy of running everything across the board, since Khador is slow as molasses.  There were some weird lanes to be dealt with and a lot of back-and-forth - the Cryx were pretty fragile until Matt popped his feat - then they got downright nasty.  This was the first time I had tried to play with my Torch warjack, but Matt tied it up with Death Chill, so it didn't get to do much of anything.  My Gun Carriage was effective, but I actually overshot most of his army and he moved them down the left flank behind cover, out of harm's way.  In the end, all I had left was The Butcher, but I had his caster down to one point. In the end, I just couldn't get close enough for an assassination run, since my caster was stuck in melee across the board.  (I probably popped my feat a round too soon - The Butcher is tough-as-nails, but I still get nervous when he's in melee).  The few troops he had left chipped away at him until he was dead.  Overall, I had a good time - Matt was nice enough to put up with my weak grasp of the rules (I'm sure he could have taken me apart in short order if he felt like it) and in the end, he said he didn't really notice any big errors in strategy on my part, which was good to hear. I'll be back for more next week...
Posted by BigPaul1e at 6:30 PM No comments:

I Might Have My Work Cut Out For Me...

...so, we bought a house last fall.  After blowing through our "home improvement" budget putting up a fence for the dog and taking the yard from "overgrown industrial dumping ground" to "doesn't make me twitch every time I look at it", we're finally starting to rummage through the massive piles of boxes residing in the basement & garage, in preparation for building the "man cave".  I decided to sort out all my unbuilt/partially finished models, and organize them by type so I could see what I'm dealing with.  So far this is where I'm at: 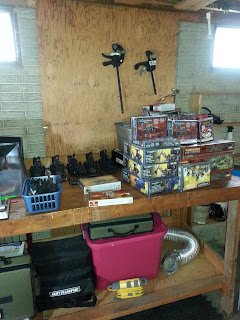 Yeah.  That's... a lot of stuff.  And I haven't even found the fantasy Orcs, or the Forge World vehicle kits, or the Dreadball teams... or the DreamForge Levithan...
Posted by BigPaul1e at 7:00 PM 1 comment: