Ever since my son was born, I've managed very little in the way of hobby time, and even less in terms of actually playing games.  Funderhammer is the Pressganger for my FLGS, and he told me that they were starting a Journeyman league in a few weeks.  I had been feeling a bit stir crazy, and some of you might remember from this post that I already had an army, brand new in the box, waiting to be played.  I discussed it with my wife and she was willing to give me one night a week for gaming.

If you're unfamiliar with Privateer Press' Journeyman League, the basic idea is that each player starts week 1 with a faction's starter box, and the point size of the games goes up every week or two.  You earn points for playing games, but also for building & painting new units.  By the end of the league, you should be pretty close to having a fully-painted, tournament-sized army.

But wait - I need to go from not building & painting at all, to building & painting a couple of new units every week?  On top of that, my chosen faction (Protectorate of Menoth) is traditionally mostly white, a notoriously tricky color to paint?  I was gonna have to come up with some ideas, quick!

Any thoughts of "competition quality" -painted models quickly went out the window - we're aiming for quick 'n dirty "tabletop" quality here.  These models were mostly going to be painted in 30- or 45-minute chunks of time that I managed to carve out of the days I'm on babysitting duty, and are meant more to shake the rust off than push my skills.  Washes & drybrushing are the rule here, not the exception - once I have a basic 50-point force finished, maybe I'll take more time on a few "centerpiece" models, but not now.

Here's the technique I came up with:

Every model was primed with Army Painter Matt White Colour Primer.  When they were dry, they all received a heavy coat of Army Painter Soft Tone ink (but GW Seraphim Sepia works well, too): 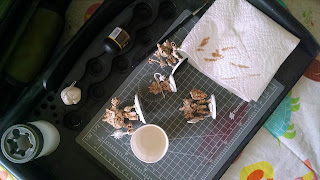 This pretty much leaves the models khaki.  (Note: this would be a great, super-quick way to make a khaki army, Imperial Guard players!)

Next, the models receive a heavy drybrush of off-white (I used Reaper MSP Bleached Bone): 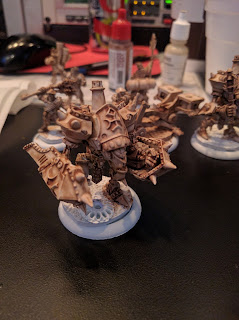 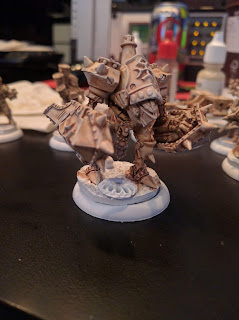 Next, the purples were done with Vallejo Model Color Magenta - this is several shades lighter than I want the end result to be: 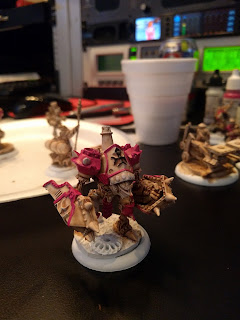 Next, the purple is heavily washed with Army Painter Purple Tone ink: 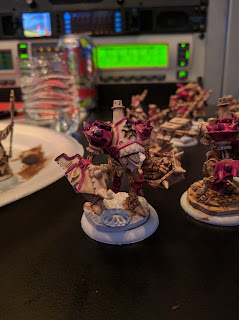 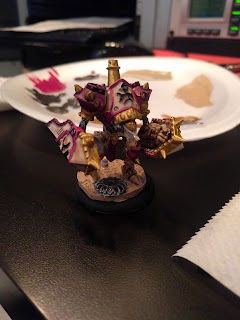 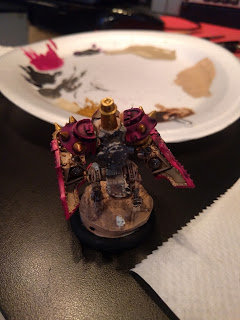 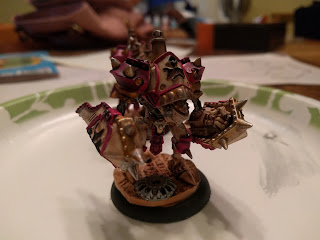 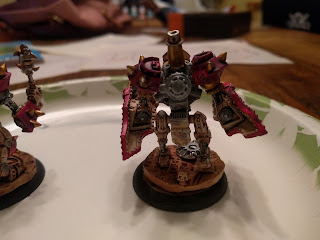 ...and that's pretty much it.  On models with a LOT of metallics I might do a quick drybrush with Vallejo Model Air Chrome, and when the whites get a little too muddy I occasionally make a glaze with Vallejo Glaze Medium + Army Painter Pure White to bump them up a bit, but usually that's more on infantry units.  Quick, easy, & "good enough"!