... so the wife, Funderhammer, & I have returned from GenCon 2013.  It was an abbreviated trip this year, as we didn't get there until Friday evening.  Here's what went down:

We left town a bit after noon.  The drive through Ohio & Indiana was as exciting as it sounds, so we found ways to amuse ourselves:


We rolled into town a little before 4PM and made our way to the hotel.  Things went a little sideways here, as they didn't have any rooms with two beds, which is what we booked - judging by some other conversations I overheard at the front desk, the hotel was not on top of things this year.  On top of that, they didn't even have any rooms that were big enough to put a roll-away bed in without violating fire code, and ignored my not-so-subtle hints to give us one anyway, and look the other way.  We finally settled on almost 50% off the rate of the room, and enough extra blankets & comforters to try to make a reasonably comfortable bed on the floor.  When we got to the room, there was actually a small sofa in there, so it wasn't a total snafu.

The wife & I got changed and headed to dinner - it's become a GenCon tradition that we go out to Ruth's Chris for dinner when we're in Indy: 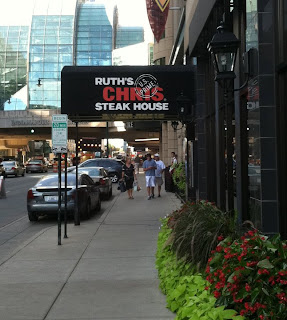 ...as usual, the food was outstanding.  After we walked back to the hotel and relaxed for a bit, we decided to take a walk - the Red Bull Indianapolis GP is at the Indianapolis Motor Speedway the same weekend as GenCon, and the bikers were out in full force: 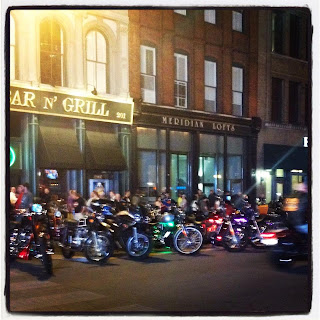 ...after checking out all the bikes for a while, we headed back to the hotel room to get some sleep.

I was up early on Saturday to take some classes - the first one being "Intro to Sculpting Miniatures With Polymer Clay", with Tom Mason.  This was interesting because while I've taken sculpting classes before, I've only ever used Green Stuff or ProCreate putty for sculpting, both of which cure when exposed to air - Tom taught us to build a layer of Green Stuff over an armature, and then do the actual sculpting with Fimo: 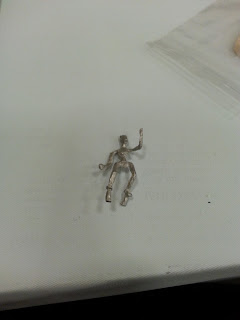 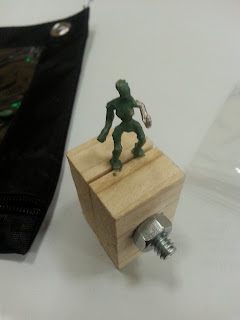 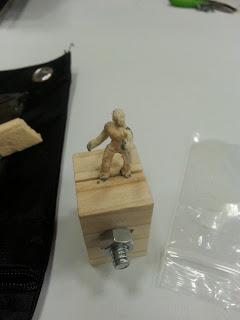 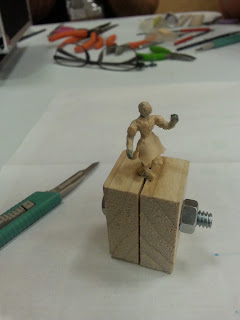 The advantage to this approach is that the Fimo doesn't cure until you bake it, so it remains workable pretty much indefinitely.  I'll definitely be picking up some to play with in the near future.

My next class was "Liber Metallica: Painting "True" Metallics Truthily", with Dave Pauwels.  A few minutes after this class started it became obvious that this was a "lecture" -type class as opposed to a "hands-on" class, which I normally dread, but I must say that Dave had a great lecture worked out with plenty of interaction from the rest of the class, and I learned a lot.  The gist of this class was how to get a look similar to "non-metallic metals", while actually using metallic paints.  I have to say I was impressed with the results - ever since NMM was declared the new hotness in the painting world a few years ago, I have to admit I haven't always cared for the look - it looks great in photographs, when taken under controlled lighting and from a very specific angle, but doesn't always look so great in person, on the table.  This method gives a very similar effect that looks great from all angles.

After the class, I ventured out into the convention center, and got my first look at the cosplayers: 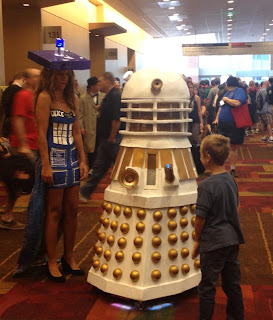 After fighting my way through the crowd, I met up with the wife and we had a surprisingly good lunch at The Hard Rock Cafe: 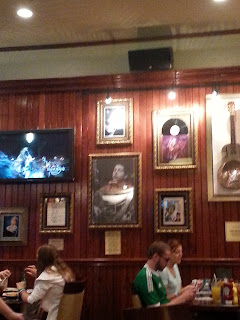 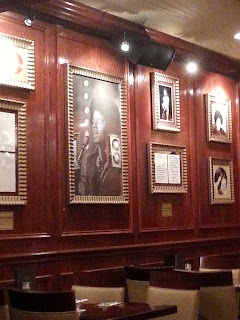 I thought it was weird that they had a whole room dedicated to Michael Jackson, until I remembered that he was from Indiana

While we were eating lunch, my wife showed me some pictures she took - when I was in class, she took the opportunity to explore downtown Indianapolis and check out some of the sights: 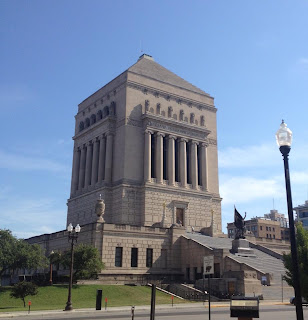 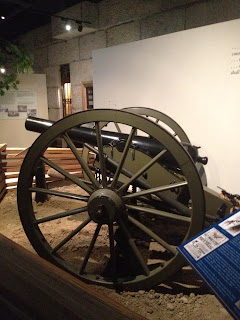 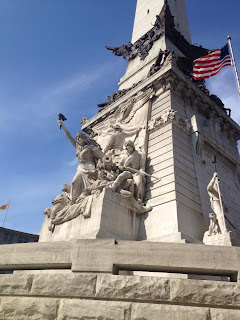 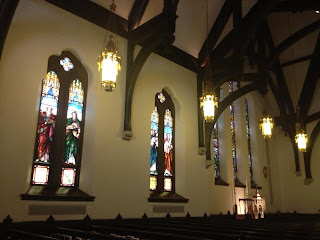 After lunch, we headed back to the room for a bit - we actually had a few board games scheduled for the evening, but blew them off to spend the evening hanging out at the pool.  After we finished, we met back up with Funderhammer for a few drinks at the hotel bar.  My wife headed off to bed, and Funderhammer & I headed to an event that he talked me into: "Dub That Hentai!", hosted by Cosplay Deviants. (website somewhat nsfw).  If you don't know what "Hentai" is, do yourself a favor and don't Google it.  Suffice it to say, the Japanese absolutely do not hold to the Western stereotype that animation is "for kids".  Despite the overall, um, wrongness of the whole event, it was actually pretty hilarious - the host would grab volunteers out of the audience, who were then given microphones and had to improvise dialogue over a scene that had the soundtrack removed.   After the scene was over, the audience would vote (by applause) on which volunteer did the best job, and they would get a prize.  The whole event was helped along by a cash bar (it seemed that most of the participants had pre-gamed the event pretty heavily, too).

Sunday morning came, and I had one early class - "Terrain Workshops" with David Dresch.  I've actually taken this class several times before, and while it's pretty pricey for a convention class, you almost always come away with a really nice piece of terrain.  David basically hauls out everything you could ever want access to while building terrain - pre-cut hardboard, styrofoam, hot wire cutters, every type of flock/ballast/static grass you can think of, glue, gallon bags full of pre-cast Hirst Arts building blocks, etc.  He gives you a quick overview of some techniques, then lets you go crazy building stuff for the rest of the class.  I've got two or three other pieces of terrain from his workshops in the past, and this class gave me a good start on another one - I'll post pics as soon as it's completed.

After the class I headed back to the hotel - our plan was to load up the car, then make a lap of the dealer room before departing.  After waiting an hour-and-a-half for a bellhop to bring a cart to our room, we got fed up and carried all of our stuff downstairs ourselves and loaded up the car.  At this point I was pretty grumpy at the hotel staff and just wanted to be home, so we decided to forego the dealer room (I didn't really have much spare cash at this point, anyway).  We stopped at one of our favorite restaurants, The Rathskeller on our way out of town for lunch, then hot the road - another Gencon in the bag!

Funderhammer, the wife & I are off to GenCon 2013!  Look for a complete recap upon our return, and follow my Twitter feed for up-to-the-minute updates!
Posted by BigPaul1e at 12:00 PM No comments: