And Then There Were Seven

So this is all that's left uncompleted out of a couple thousand points' worth of Ultramarines: 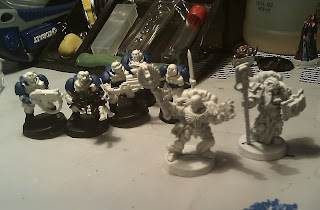 (Sorry, crappy cellphone pic)
The Scout squad was completely forgotten, to be honest - I thought I was FINALLY done with everything that came in the last battlebox I bought, and when I was digging through my toolbox for something, I found them stashed in a small compartment. They're probably the last of my minis that are going to receive a relatively "quick 'n dirty" treatment to get them up to tournament standard. They require a bit more attention, however, since they're not wearing the standard power armor - I based the pants & shirt tonight in Formula P3 Hammerfall Khaki and am going to build it up to white highlights, as opposed to my usual "quick" method of basecoat white / Devlan Mud wash / drybrush white. Since none of them are wearing helmets, I also plan to try giving their faces (especially the eyes) a bit more attention than usual, since that's one of my weak areas.

The Chaplain & Librarian are models I always planned to give a bit more attention, mostly because they're gorgeous sculpts - I had my FLGS special order these particular models from GW Direct since I liked them so much. The Librarian has an insane amount of detail that's going to be a real challenge, and the Chaplain's color scheme is almost entirely black & white - the two most difficult colors to paint well, since they don't lend themselves to any of the traditional "shortcut methods" at all.
Posted by BigPaul1e at 3:51 AM