Picked up some goodies today - first up: 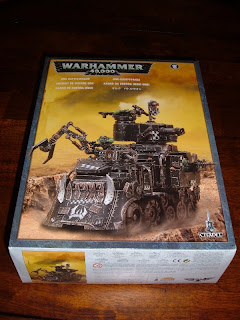 The first (of many) Battlewagons!  The downside:  I forgot to order the upgrade sprue.  I was browsing eBay and someone is selling Battlewagons with the upgrade sprue, but the listing didn't make it clear if it was two separate items (the picture on the auction is just of the Battlewagon box).  I thought "Hmmm, maybe GW is including the upgrade sprue as part of the kit now!" (my FLGS didn't have one in stock for me to inspect).  I should have known better than that...  I really like the looks of the GW upgrade kit, but it's awfully pricey for what you get - I wasn't really planning on scratchbuilding five deffrollas, but it looks like it would be so easy to do with some PVC couplers or dowel rods, I don't think I can bring myself to pay for something I can build for pennies.

Another thought:  There are rumblings about a new Ork codex in the spring - I'm gonna be real upset if I build a half-dozen Battlewagons and then the list isn't legal in the next codex.  :-/

Next up is some 'Ard Boyz armor sprues: 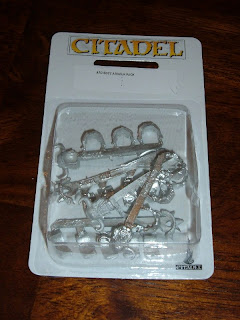 The funny thing about these:  I actually ordered them from my FLGS a couple of months ago as an afterthought, while I was ordering some other models - I had just started my Orks, and hadn't decided to do a theme army at that point.  When I went back a week later to pick up my order, these were missing - I mentioned it to the clerk, and he said "That's all I've got right now".  I've placed several orders since then, and there was no mention of them - today I stopped by when the owner was there, and he said "I've got something for you!"  Apparently these came in at some point, and got misplaced.  The bad news is, I don't think I'm going to use them - I think they'll mess up my point totals on the list I'm building, and they don't really fit the Freeboota theme.  (I've actually been shaving a lot of the spikey bits off of my Orks, to make them look more "period-correct" - well, as "period-correct" as "imaginary-pirate-monsters-from-outer-space" can be, anyway).

Lastly is a few paints: 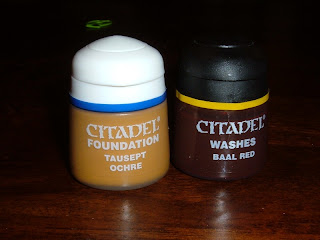 The Baal Red is because although I'm a big advocate of making your own washes, I haven't perfected a red wash that works quite as well as Baal Red yet.  The Tausept Ochre is because I've been trying to perfect my technique for painting yellow - I saw this article at A Gentleman's Ones, and thought the results were fantastic.  The Tausept Ochre was the last color I needed to replicate his method.