...so one day last week I woke up at the crack of dawn on my day off for a doctor's appointment, and right before I was getting ready to leave the house, they called and canceled.  Grrr. Since I was up and had a morning to kill, I decided to crank out some objective markers - the last few times that lars4life & I have played at our FLGS, we've been using plastic tokens or dice as objective markers - not very immersive.

Back around the time GW published Planetstrike, they released this set of mines, bombs, & booby traps: 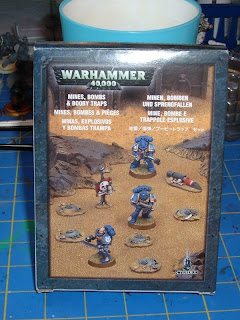 ...I bought a set, threw it in the giant box that contains my terrain "to do" pile, and promptly forgot about it.  After digging through the closet for a while, I dug it out and decided to see what we had to work with: 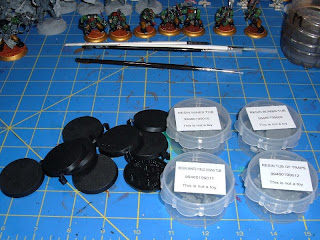 ...a bunch of 40mm bases, and four tubs labeled "resin mines", "resin bombs", "resin mine field signs", and "resin traps".  I decided to use the 40mm bases, as it's my understanding that it's a pretty common requirement for a lot of tournaments for players to bring objective markers that are built on 40mm bases.  I don't have any plans to play in any tournaments, but if I ever do, at least that's one less thing I'll need to worry about.

I just dug around in the bits until I saw some pieces that caught my eye (there are several different styles on each type in the tubs), and glued them down to the bases: 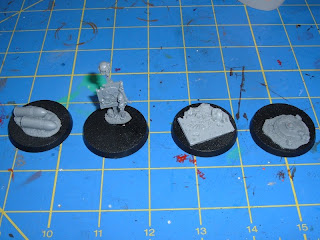 For the marker with the mine on it, I wanted to make my own sign, but I needed a signpost - I started by gluing together a couple of wooden craft sticks, using my small clamps to hold them while they dried: 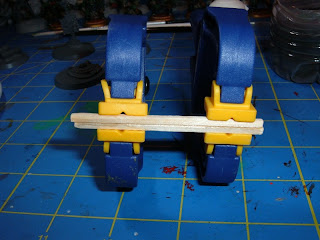 Next, I printed out a .pdf file I had saved on my computer of some 40K-themed signs & placards - I think somebody posted these on WarSeer at some point: 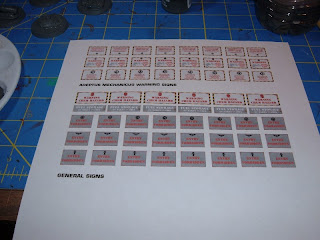 I picked the "Entry Forbidden" sign, glued it to a piece of thin cardboard, and cut it out: 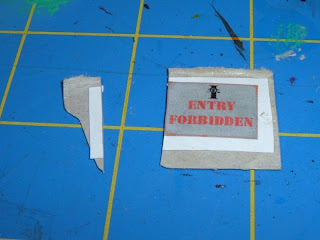 I glued it to my signpost and cut the bottom of the post at an angle so it would look like it was leaning, and glued it to the base with a blob of thick superglue.  Then I primed the markers with a brush-on primer: 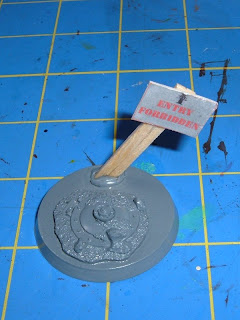 Next, I coated the bases with PVA glue and dipped them in my tub of basing sand, and left them to dry a while: 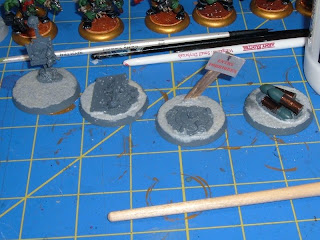 After the sand had dried, I basecoated the sand with Bestial Brown: 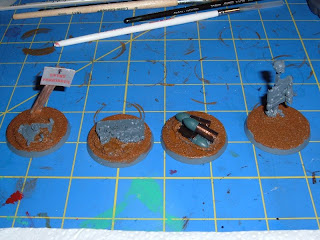 ...then I drybrushed them with Tausept Ochre: 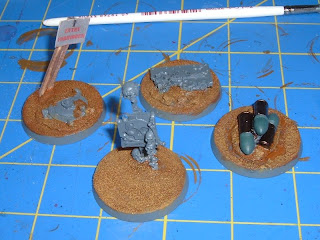 Then I started painting: 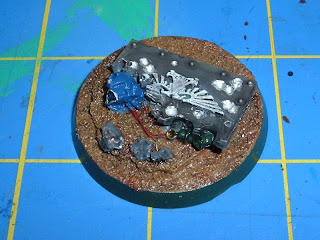 (I painted the lips of the bases with Orkhide Shade, since the gaming tables at my local store are carpeted dark green).

This is what I came up with after a while:

Not bad, but they still needed a little something - I went to my terrain box and found this miniature razor wire that I bought a while ago: 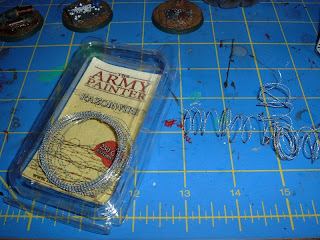 To get the shape of the "coil" right, I cut a section and wrapped it around the barrel of a pencil: 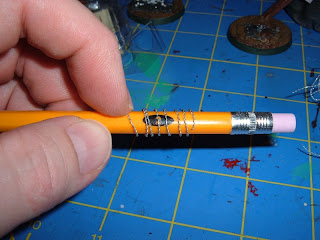 Then I adjusted the shape and glued it down to the markers: 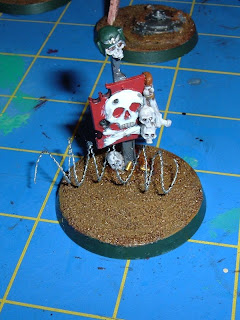 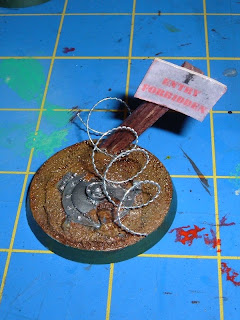 The one marker felt like it had a lot of "dead space" in the front, so I dug out a bag of assorted dried moss (available with the dried flowers in most any craft store) and tore off a few pieces: 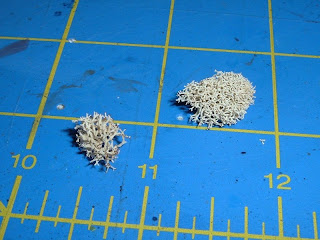 Then I glued them down: 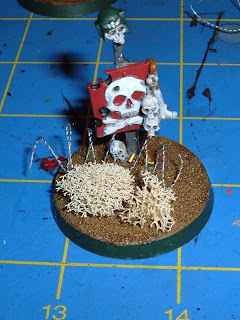 ...I added a bit of flocking around the bombs, and some other weathering here and there.  Overall I think they look pretty good, and will definitely add a nice element to my games!
Posted by BigPaul1e at 4:00 PM