I found a pretty good deal on Craigslist the other day - an Iwata Eclipse airbrush & a bagful of spare parts for $25: 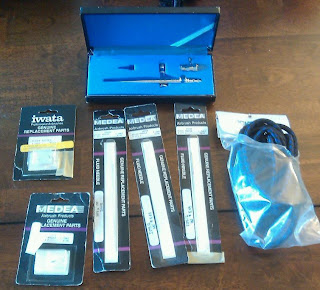 As I mentioned in my article on airbrushing, the Eclipse is a good choice for airbrushing models - this particular one is a side-feed brush, so it wouldn't seem to be ideal, but the Eclipse line is specifically designed to shoot thicker paints, so it's not a problem.  The seller told me that his father was a graphic designer and had recently passed away - he was cleaning out the house, and put these on Craigslist.


The nice thing is that the airbrush came with spare 0.2mm needles & nozzles: 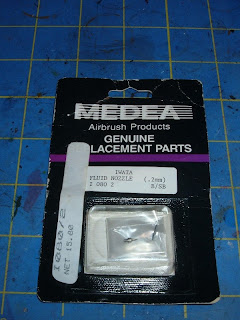 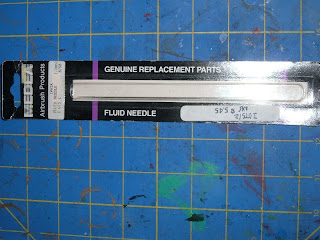 ...the current Eclipse isn't available in 0.2mm, and can't be converted to my knowledge - you have to spend another hundred bucks on the Iwata High Performance Plus model to get 0.2mm.  At some point the Eclipse series was redesigned (the new models have a cutaway handle) and Iwata must have changed this.  If you look at the parts list for the High Performance Plus models, at the bottom there is a listing for the needle & nozzle for the "Original HP-B" - that's what this is.  Pretty nice to get a 0.2mm Iwata airbrush for twenty-five bucks.  The brush was pretty gummed up - I got the feeling it had been sitting for at least a decade, and I had to resort to pliers to get the old needle out.  I gave the airbrush a thorough cleaning & put in one of the sets of still-in-the-package needle & nozzle, and it works great!

I also decided to greatly simplify my airbrush setup - previously I was running a manifold with a separate hose for each of my airbrushes, which required a ton of adapters & fittings, and was causing me to lose pressure.  I went to a single-hose setup and added quick disconnects to all my airbrushes - here is a pic of everything that was removed from my setup: 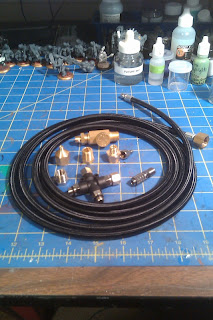