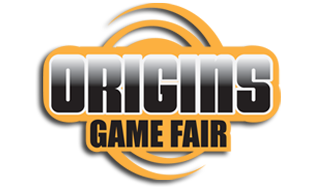 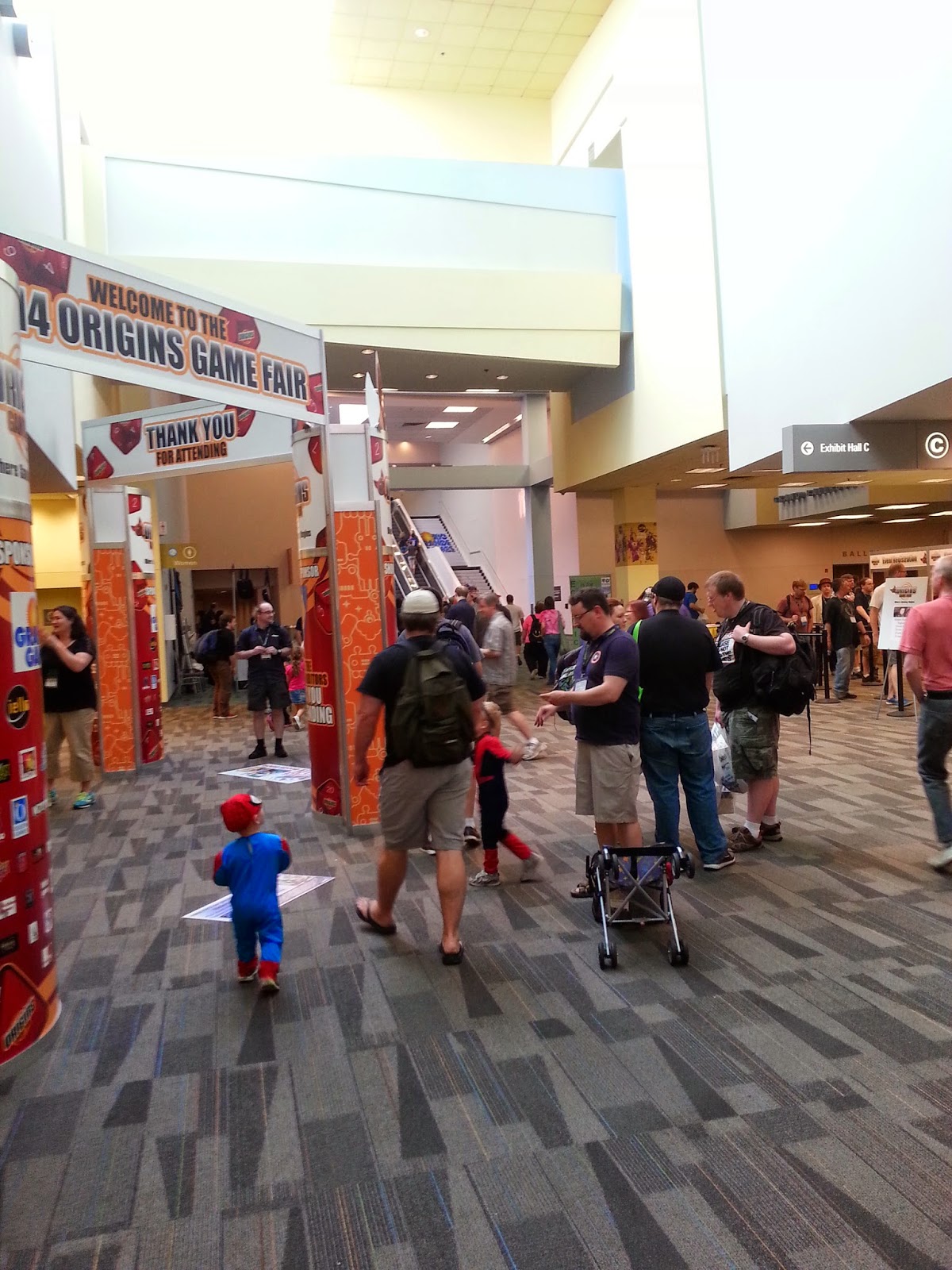 Saturday morning I hit the convention bright & early for an RPG - a Cartoon Action Hour game featuring the characters from He-Man & The Masters of the Universe.  It became fairly obvious what table my game was at when I walked into the ballroom and saw this guy: 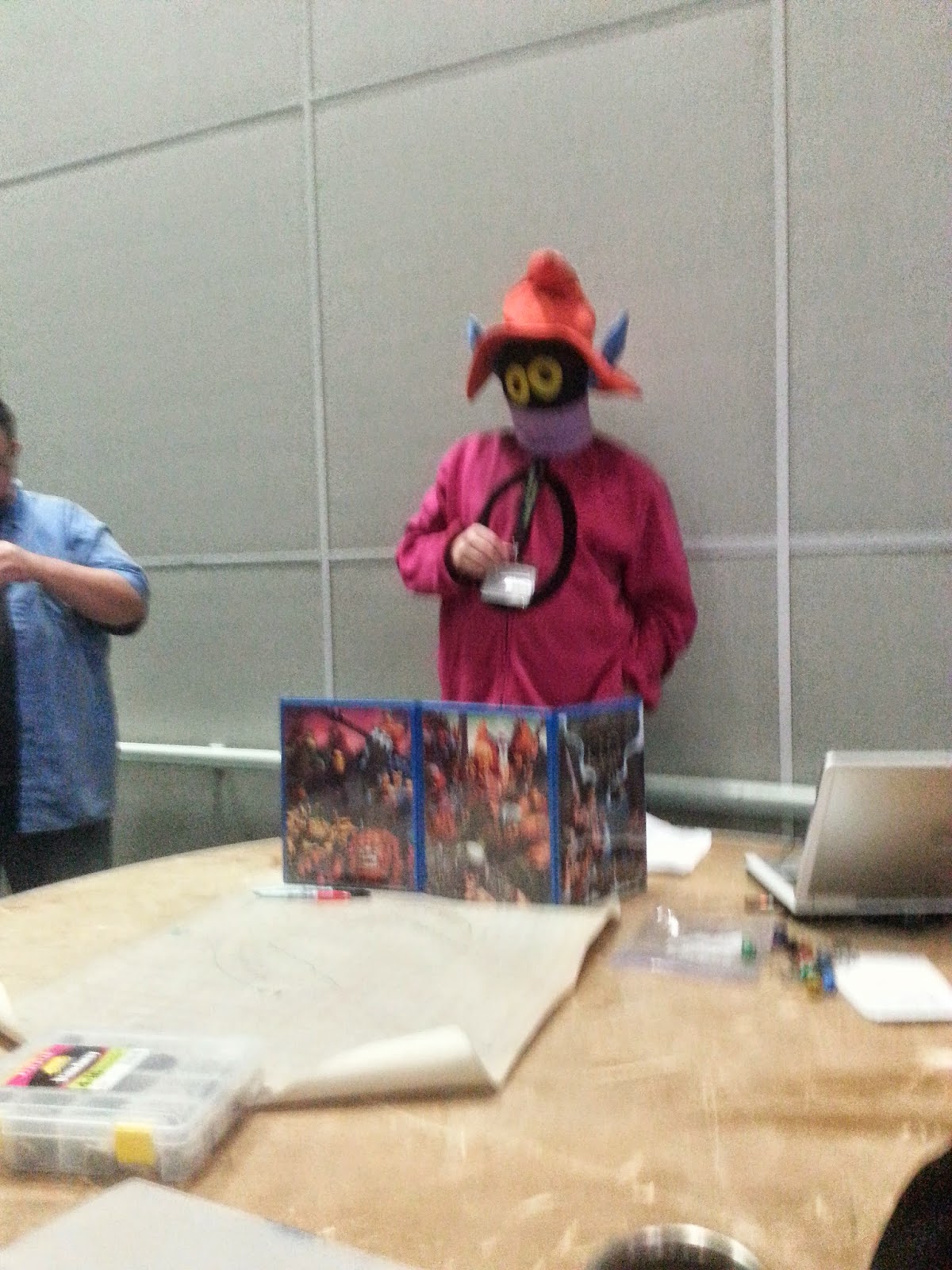 ...and of course, since it was Saturday morning and we were playing a game based on cartoons, the GM gave out sugary cereal: 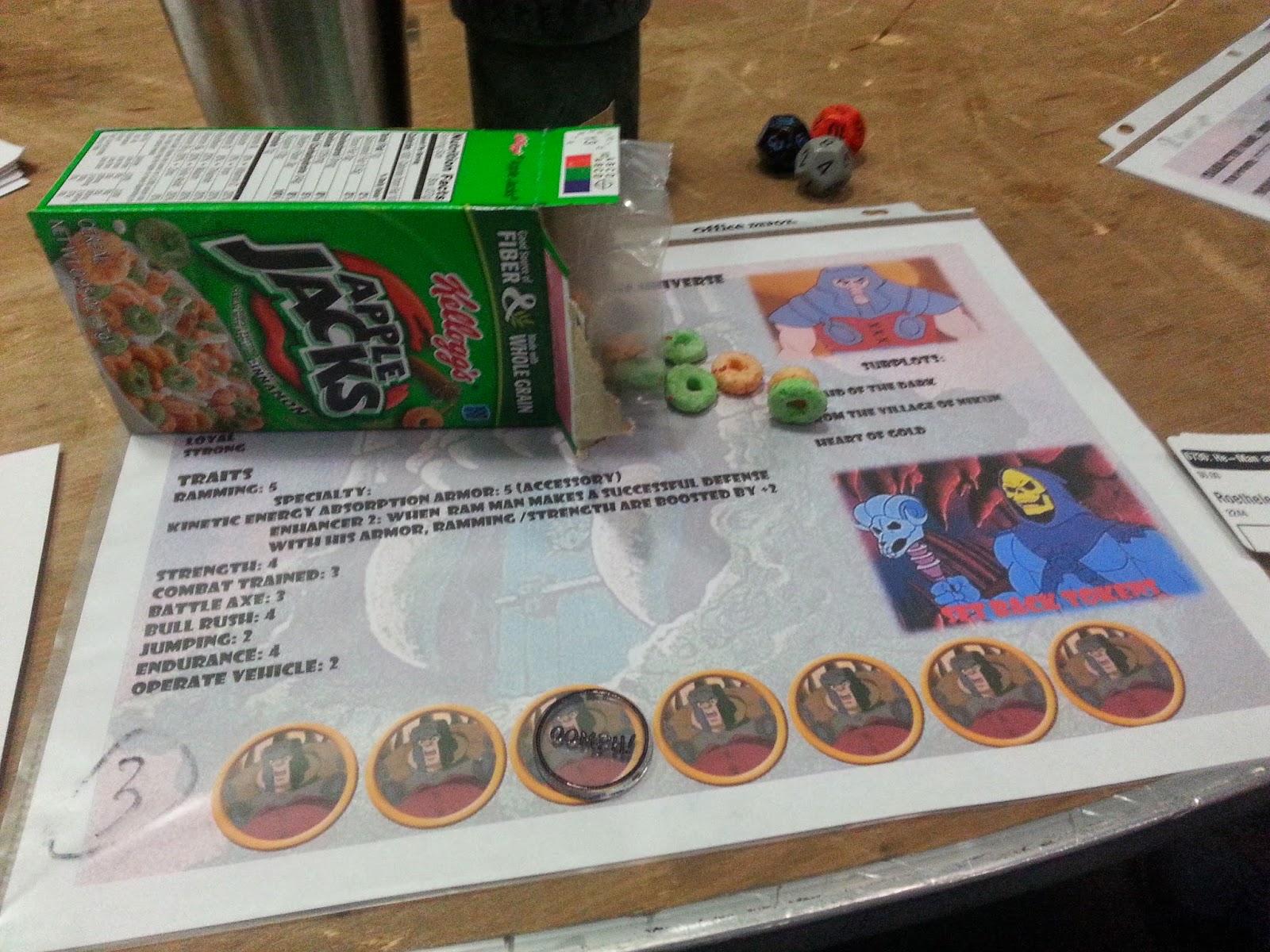 ...and the game was periodically interrupted by 1980's toy commercials: 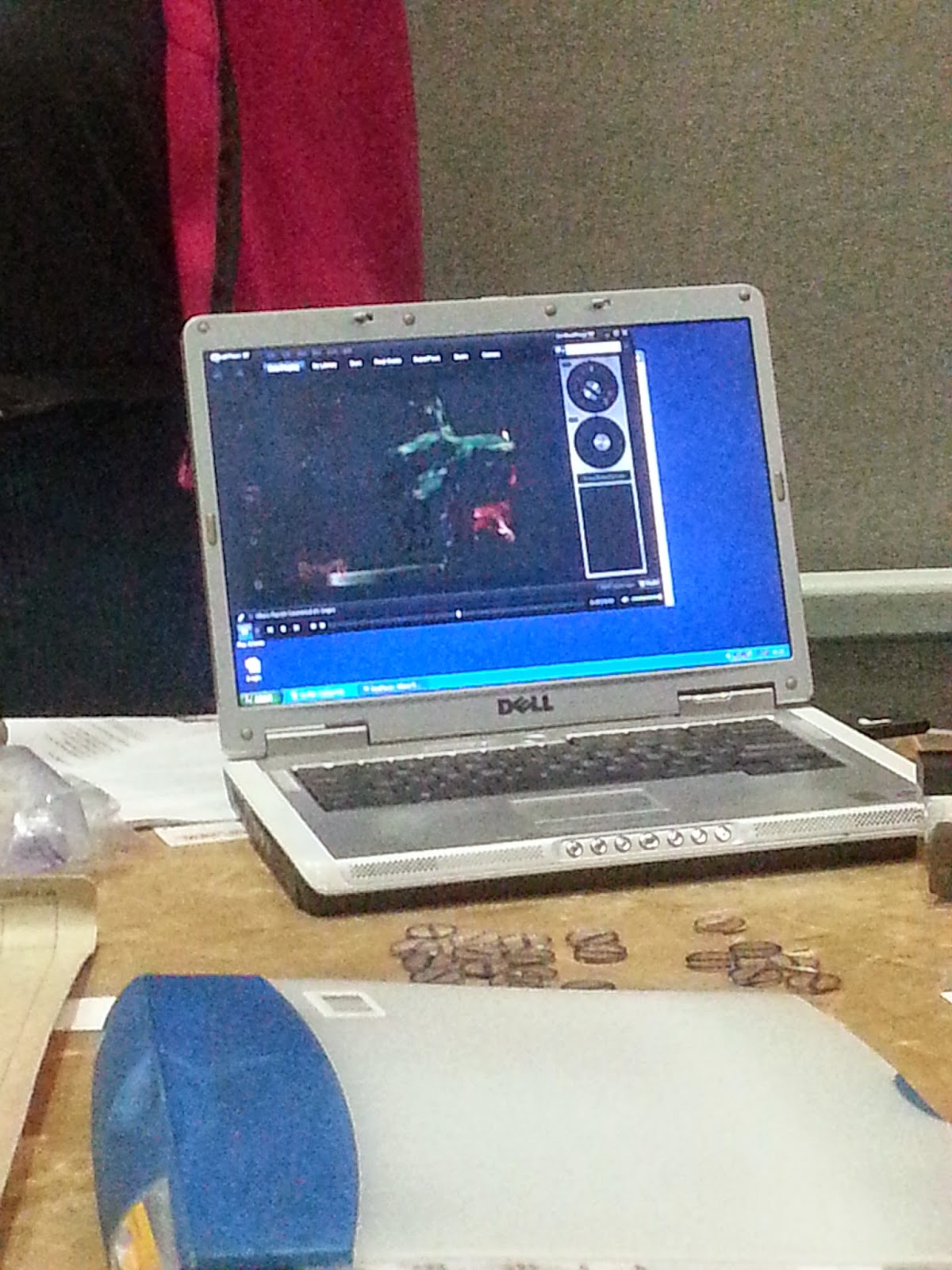 Overall, this was one of my favorite events of the con.  The GM, Bryce Whitacre of Fearlight Games, did an amazing job of giving the game just the right mix of engaging action and absurd silliness, and the Cartoon Action Hour system was a lot of fun - I would have bought the book at the convention, but apparently it's in the process of being printed right now.

I had an hour or so to kill before my next event, so I wandered over to the minatures hall to see the sights: 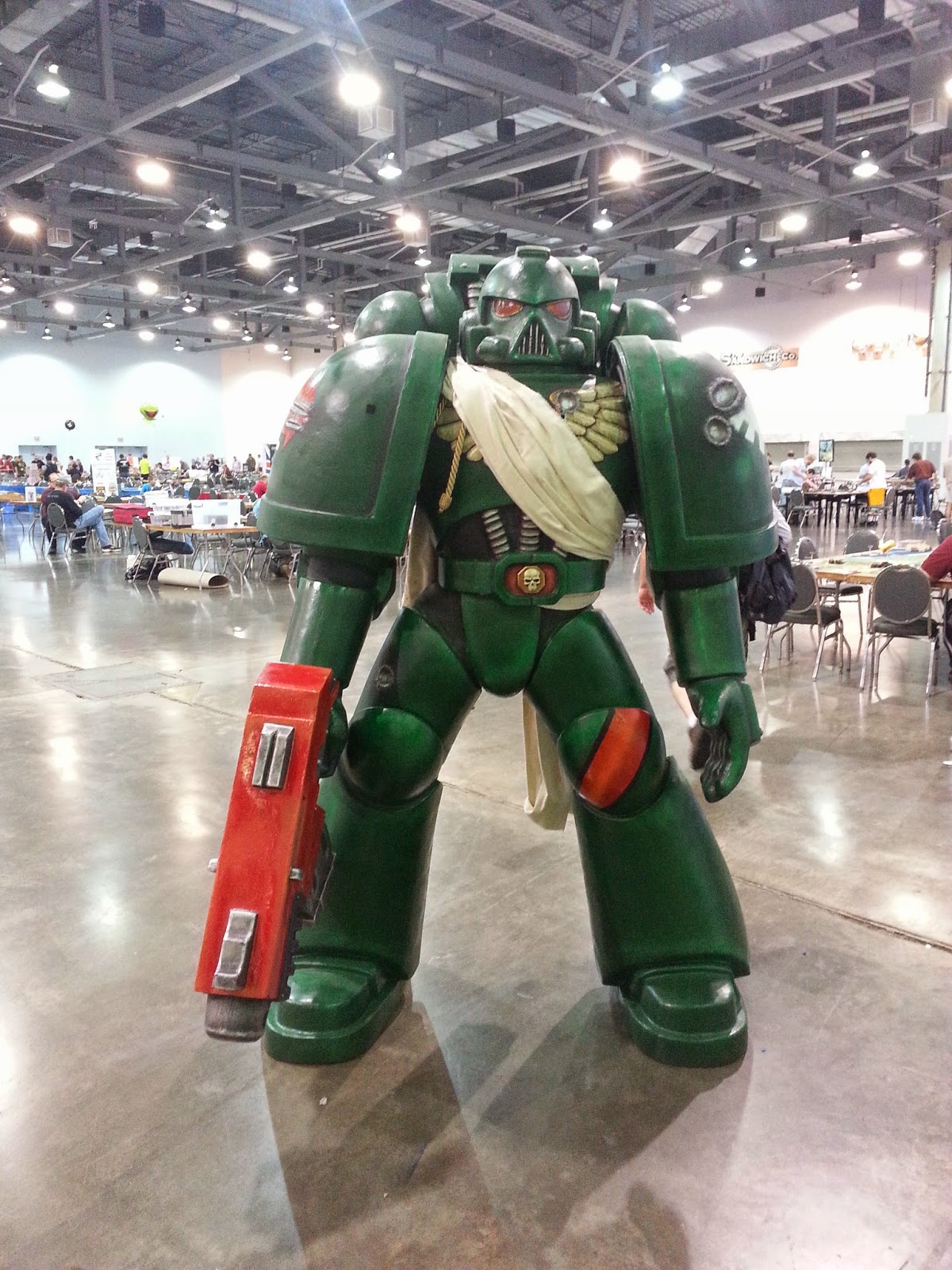 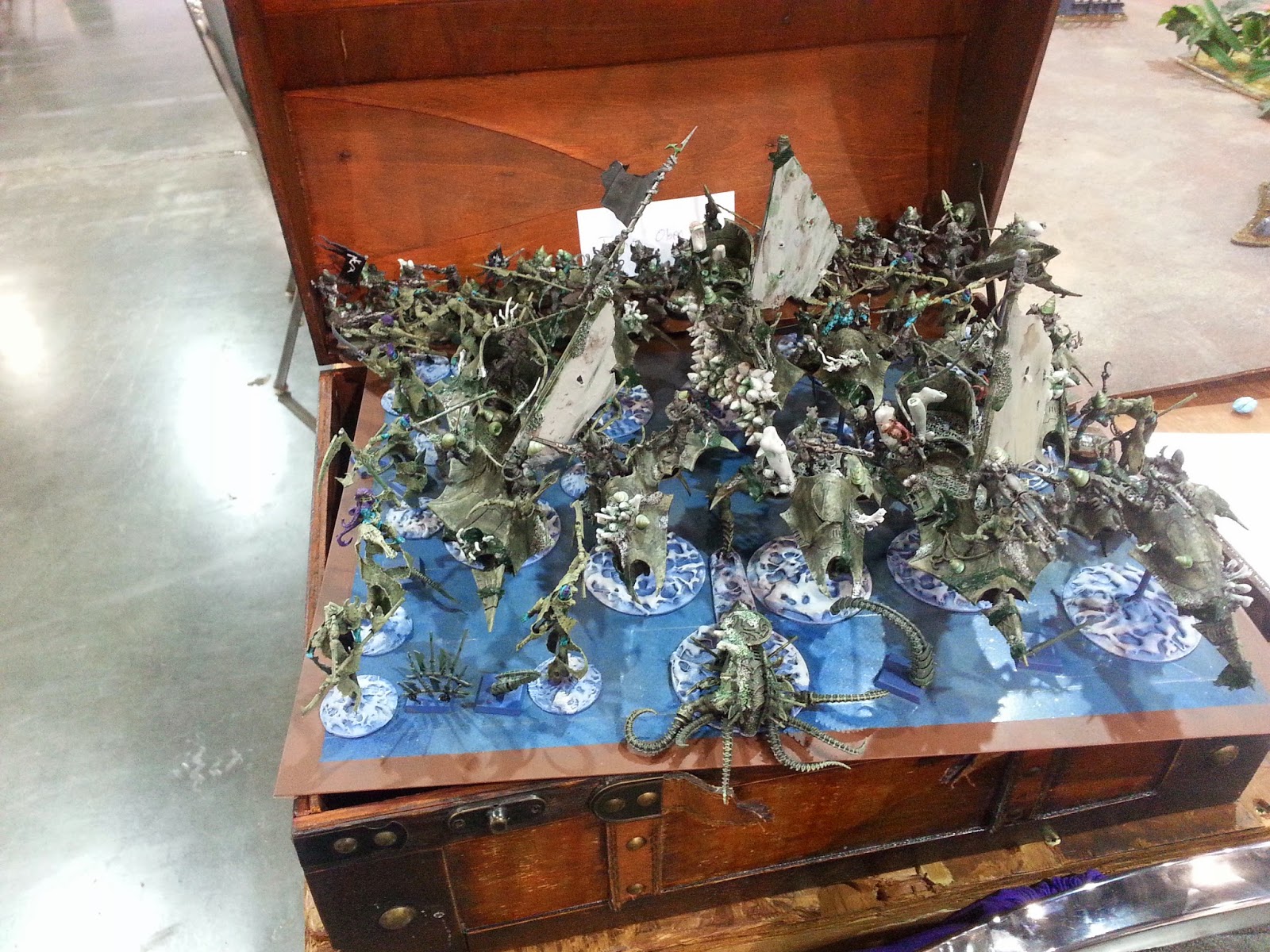 Some nice looking armies in the 40KOrigins area 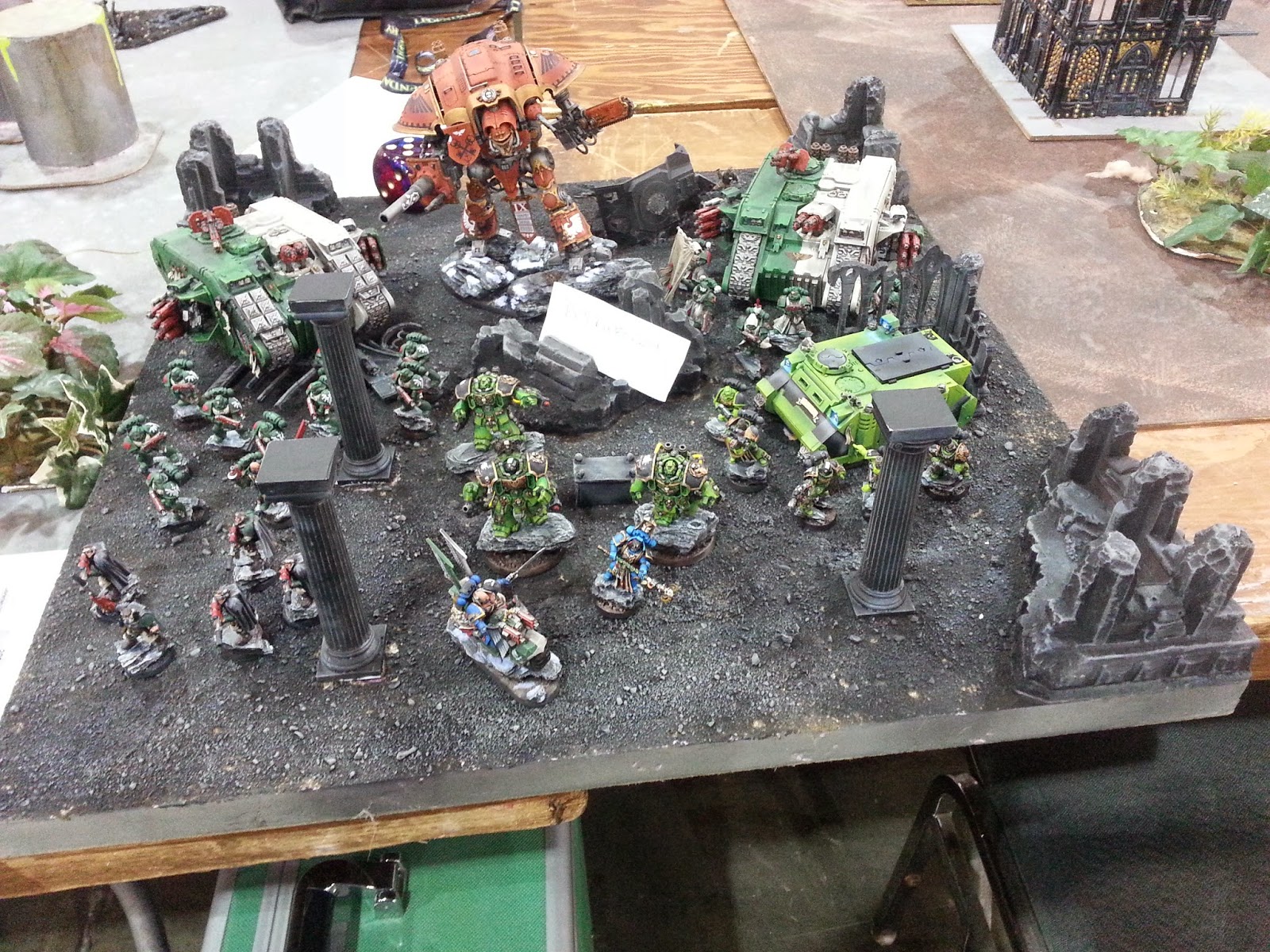 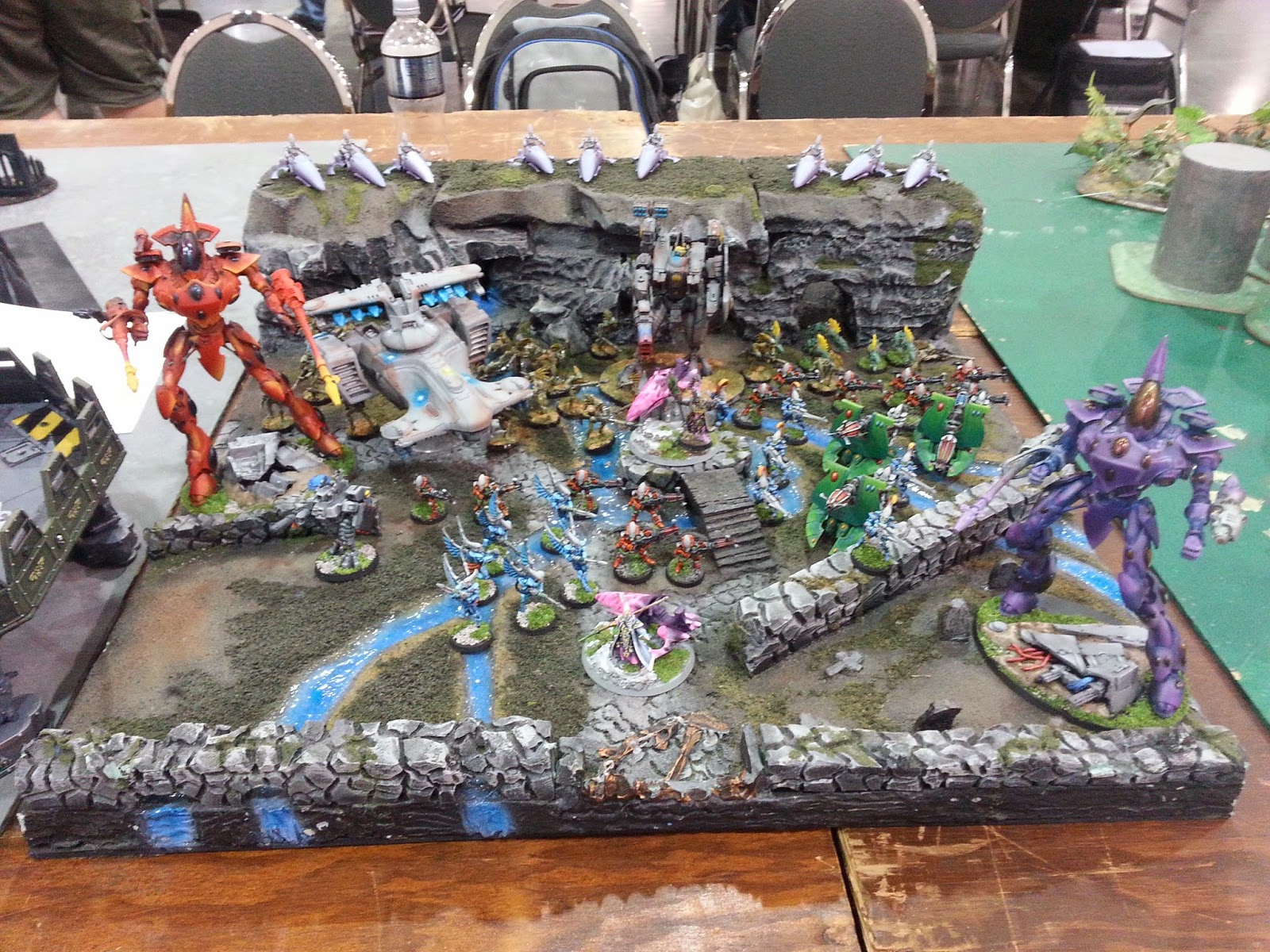 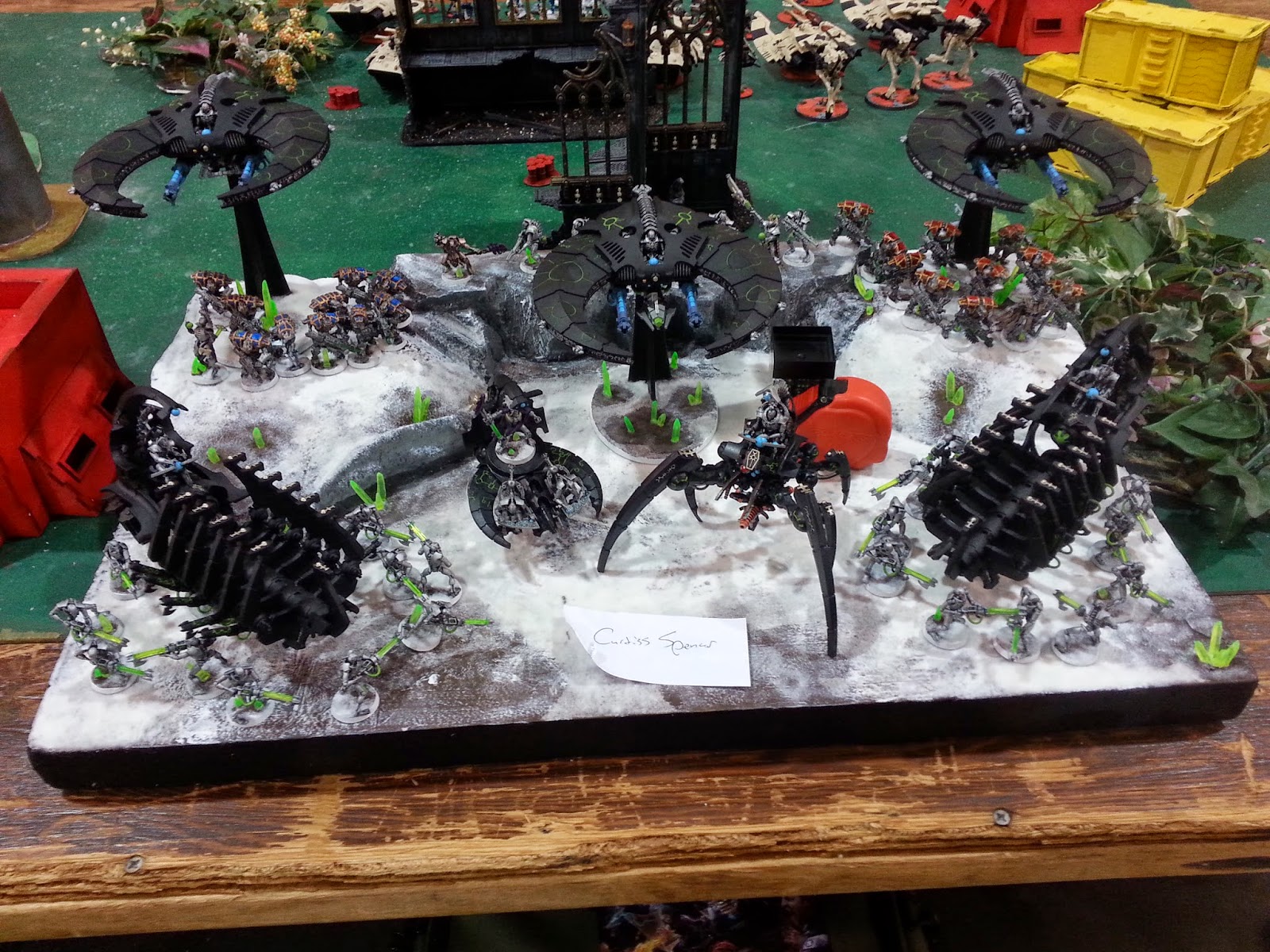 ...my next event was a demo of Infinity - I had seen the game on blogs and at my FLGS, and had been impressed with the models, but never actually had a chance to play it.  The setup was two small teams on a 4'x4' board: 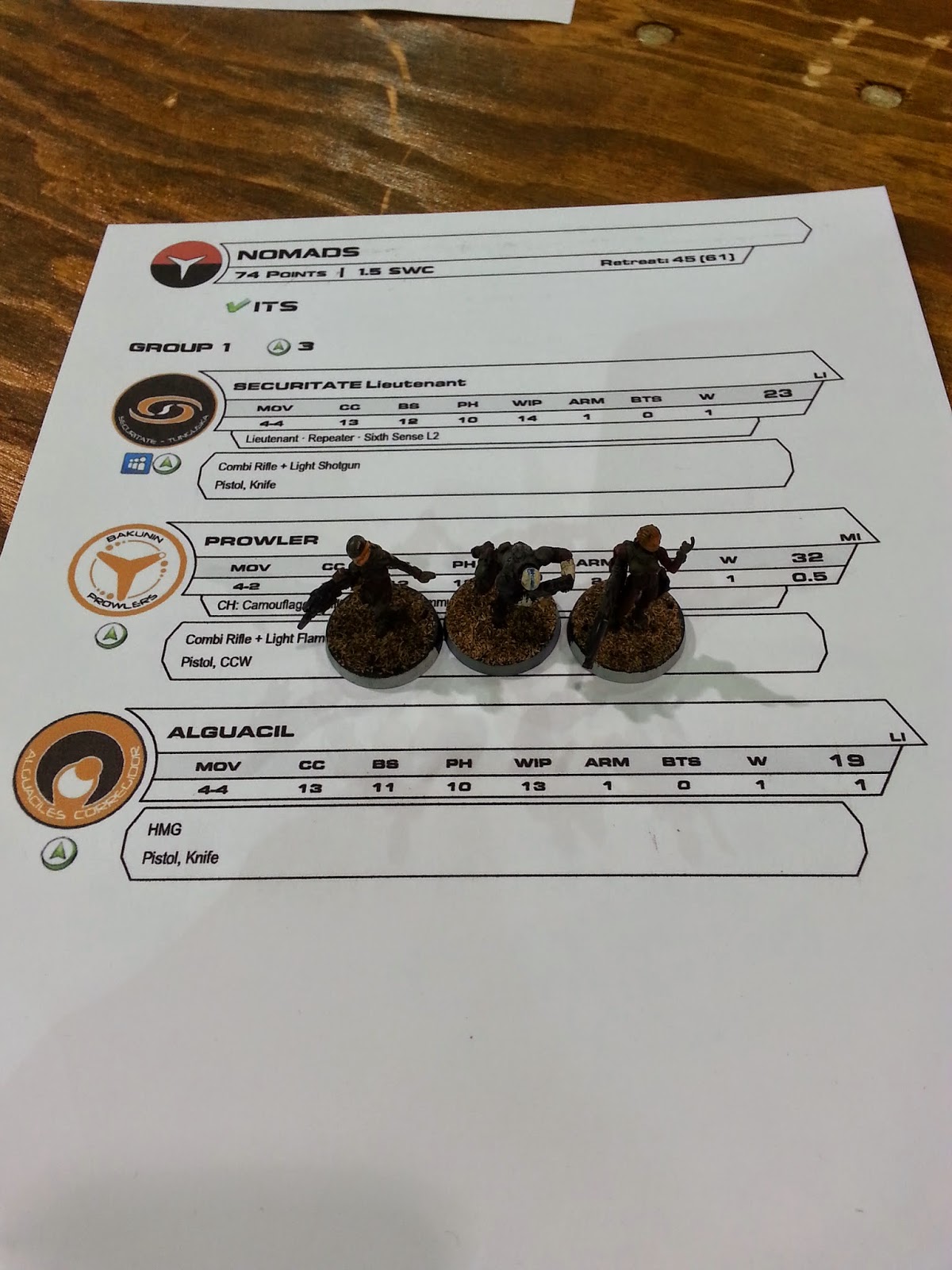 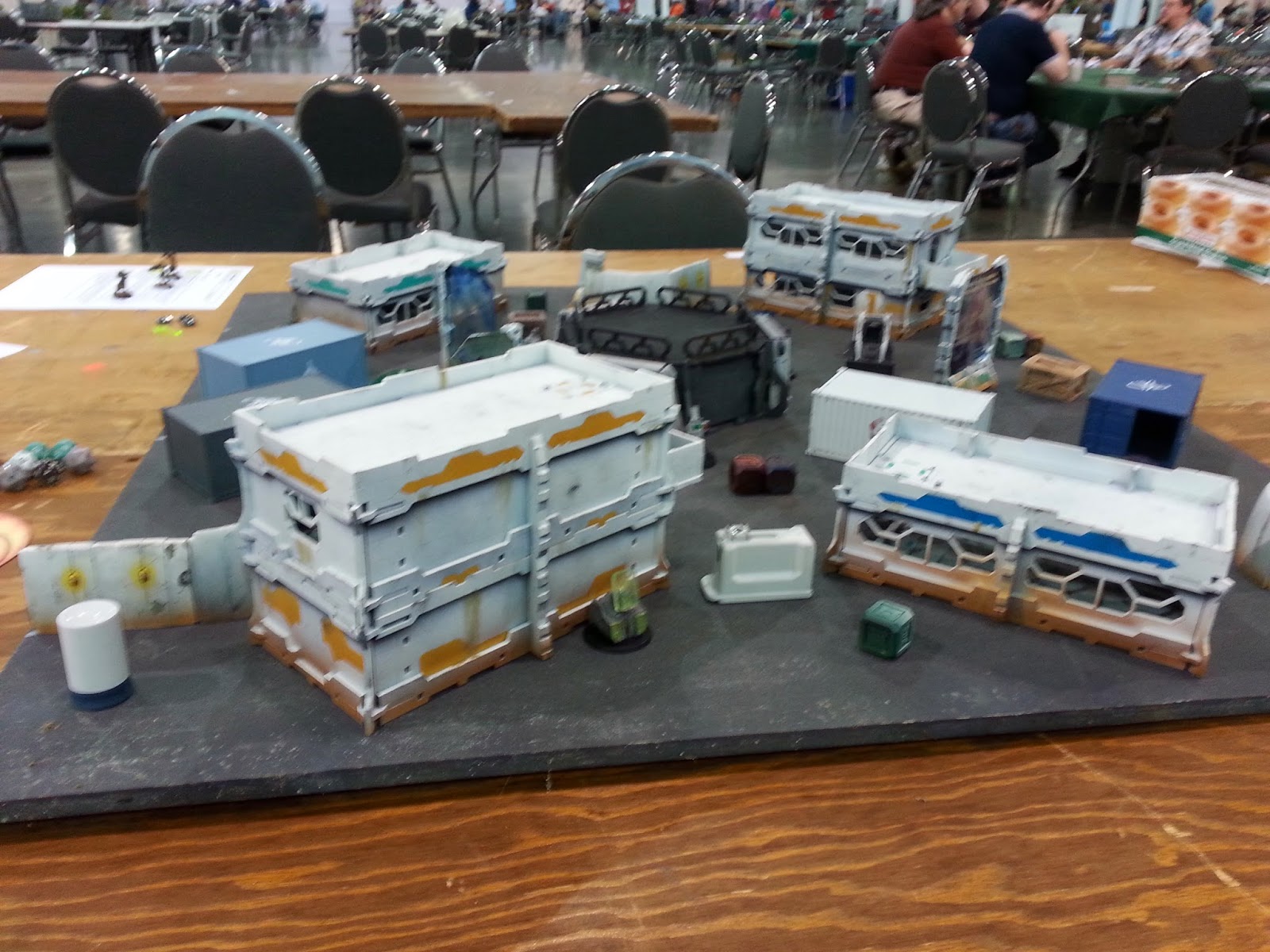 I liked the game well enough - unfortunately the team that was teaching the game was a man short, and our GM was trying to run two tables at once, and my opponent was on the phone dealing with some minor crisis involving workers at his house several states away, so... yeah.  Not the best intro to the game.  I also (out of complete blind luck) managed to stomp my opponent pretty badly, which isn't actually a lot of fun when you're trying to learn the nuances of a new game system.  I chatted with the GM for a bit afterwards to get a little bit of a better feel for the game, and it might be nice to have a small skirmish-type game around for a quick play.  And I do love me some terrain.  (I find it funny that "line-of-sight" has inspired more rage through the various versions of 40K than probably anything else over the years, and this game seems to revel in it).

After the Infinity demo, I headed back to the Board Room to meet up with my group.  I got there right as they were setting up Ticket to Ride: Nordic Countries from Days of Wonder: 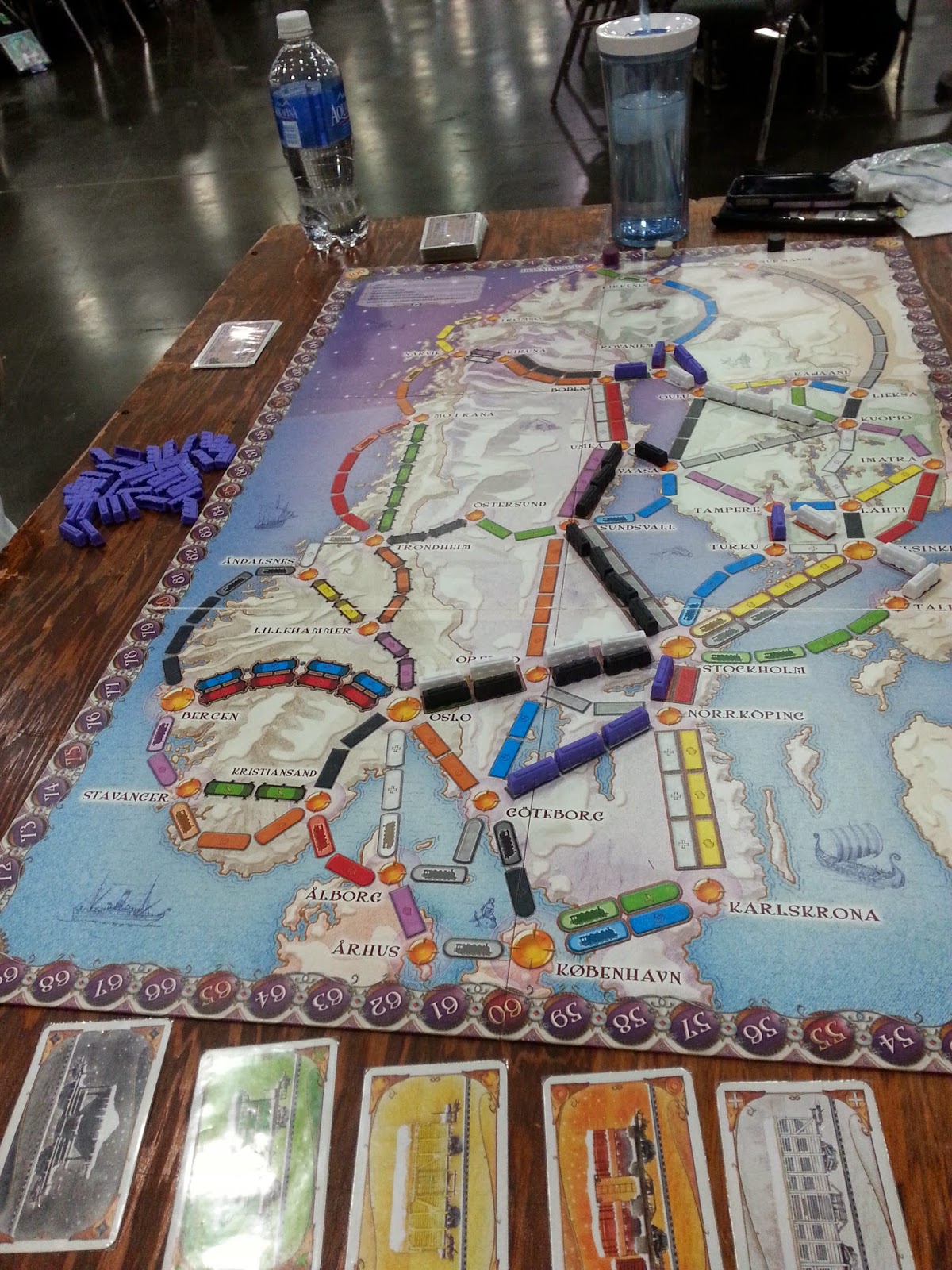 Ticket to Ride is one of my all-time favorites, and I had never played the Nordic Countries version.  The game incorporated two new mechanics - "ferries" and "tunnels".  I won't go into it here, but the short version is that I really liked the "ferries" mechanic, but hated the "tunnels".  There is also no hand limit in this version of TtR, which I liked a lot - overall this is one I'll definitely consider purchasing in the future.

After the game we decided to make a lap of the vendor hall before it closed - I stopped by the Mayfair Games booth and picked up the alternate maps & mini-expansions that I didn't own yet for Settlers of Catan: 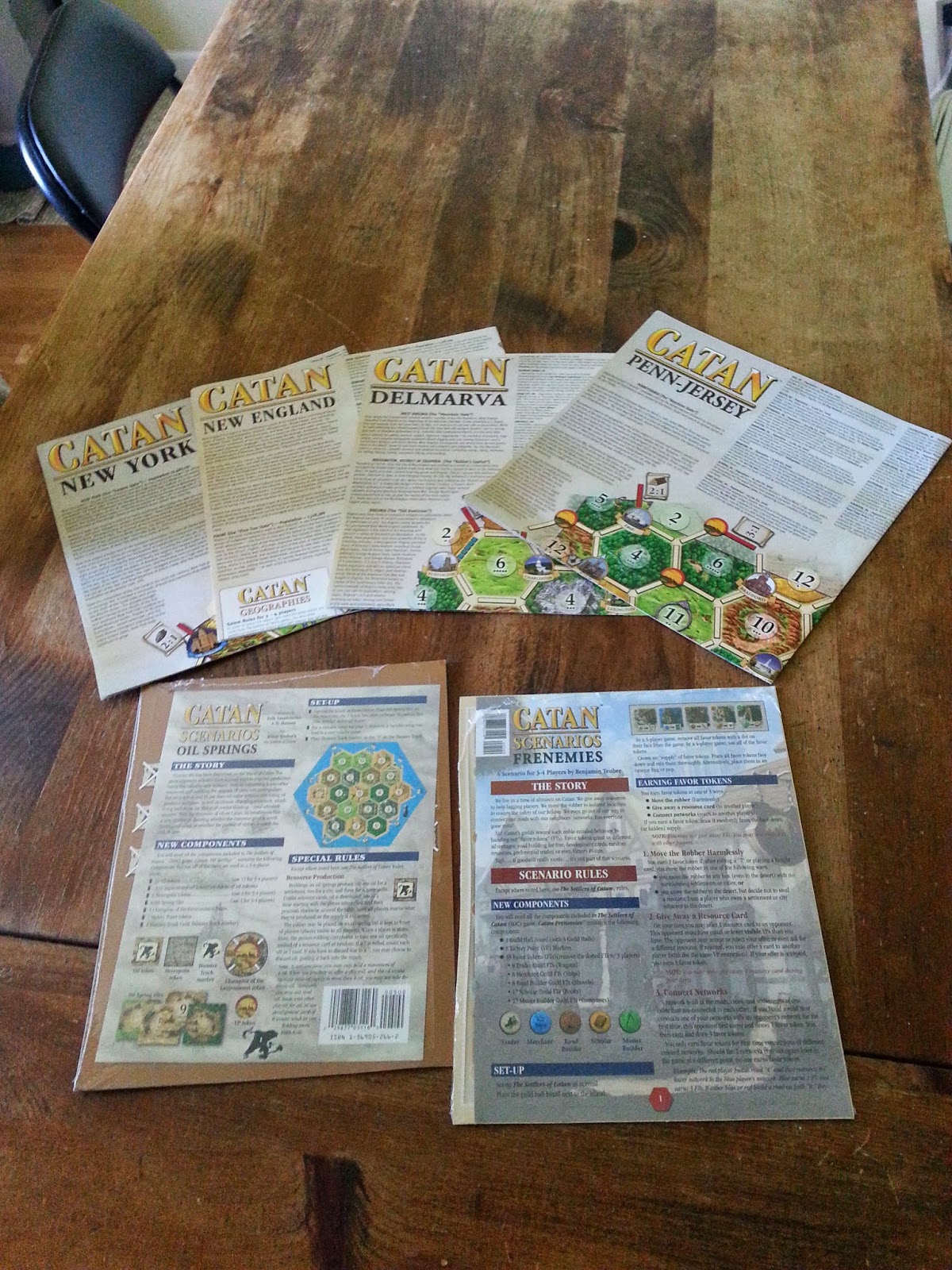 I also browsed their clearance rack and found a copy of Horus for $7.00 that looked interesting: 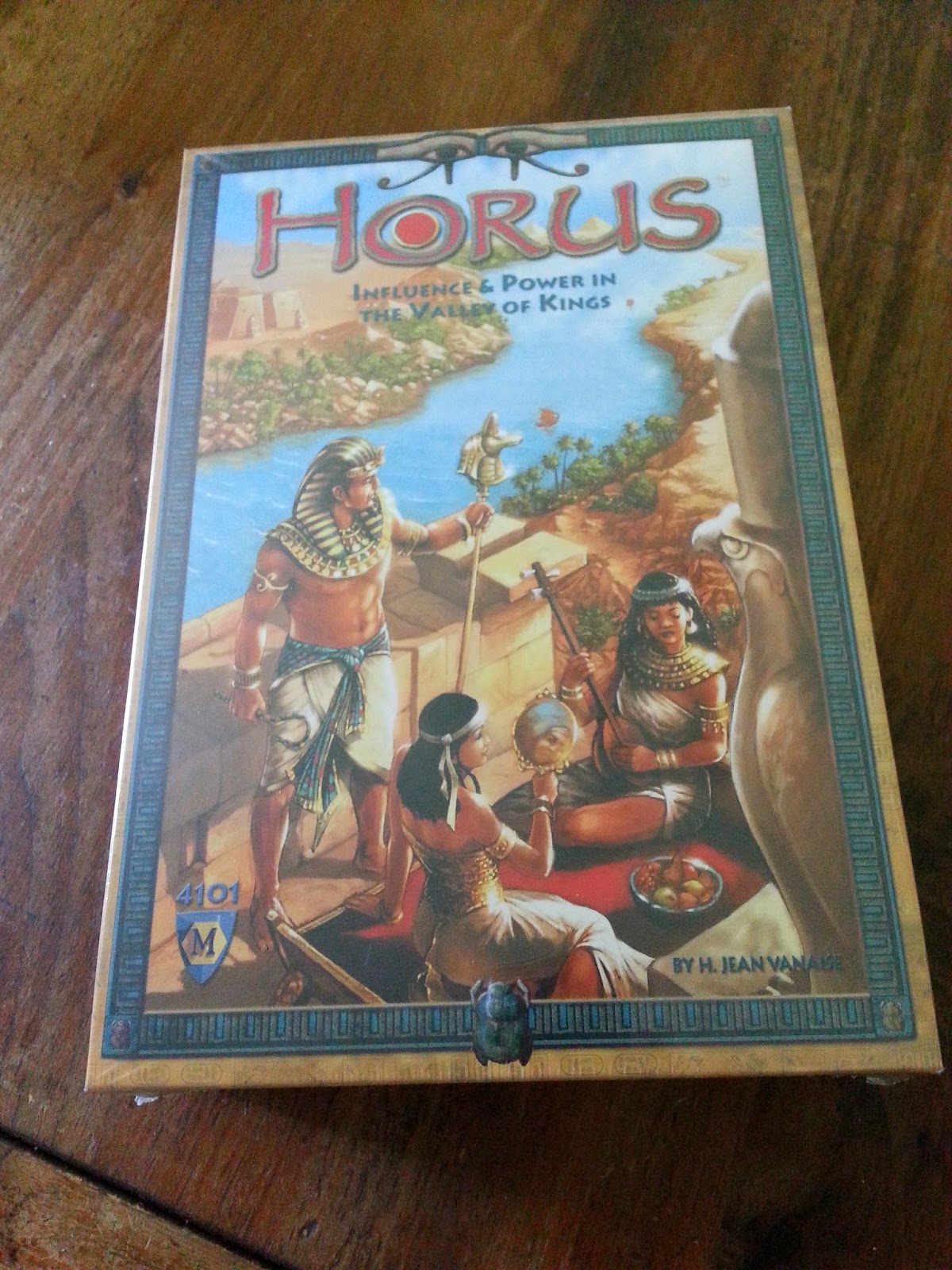 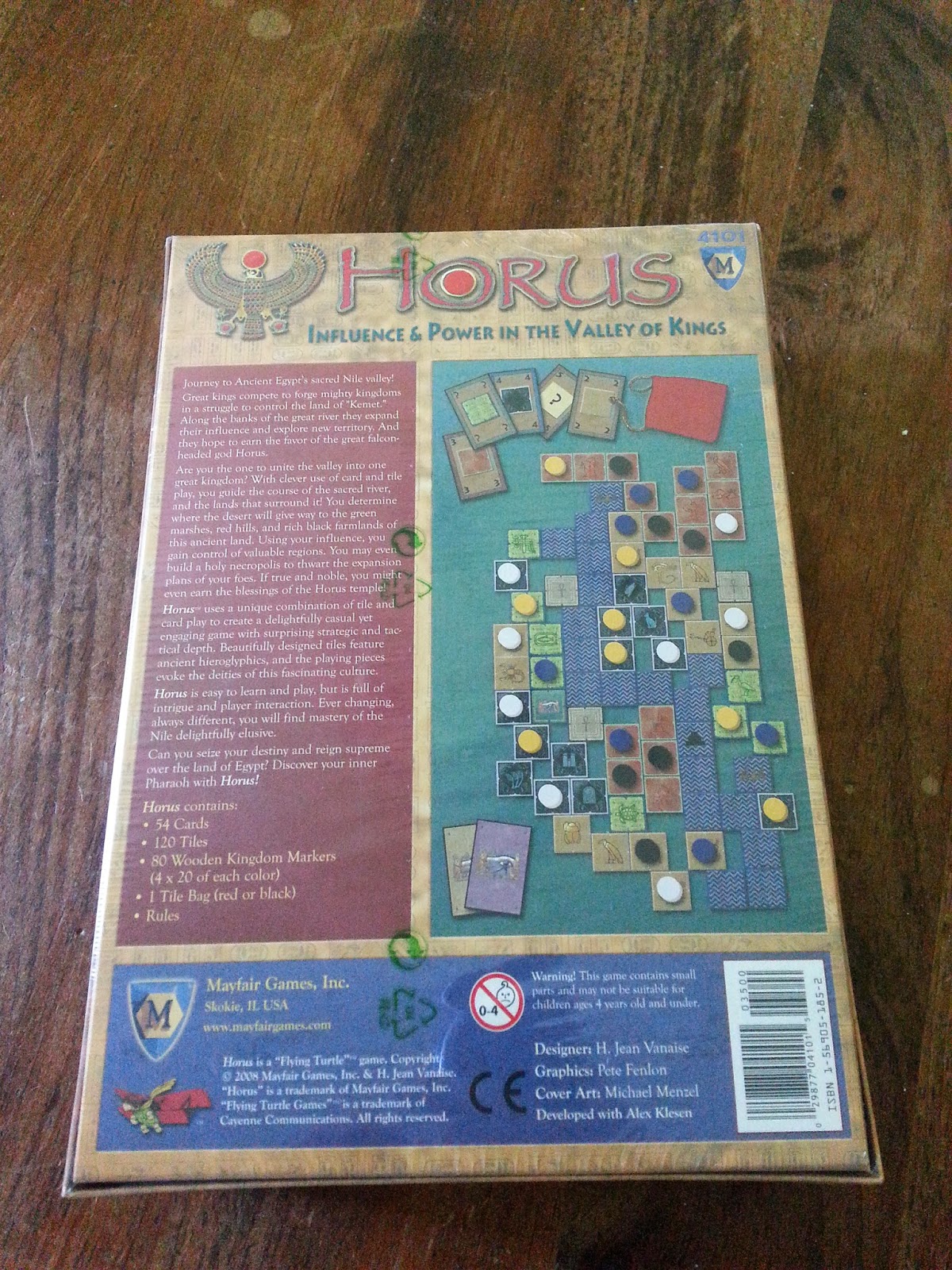 After that, we headed over to the Paint 'N Take by Reaper Miniatures - this is something we do every year.  Everyone who buys a badge at the con gets a free miniature, plus use of paints & brushes - thanks Reaper!  I almost always choose a fantasy-themed model, but I'm still sick of them after building my Dwarfs army, so I picked a big stompy robot:

Not bad for 30 minutes, 4 colors, and a crappy brush

We finished right as they were shutting the hall down for the day, so we headed off in search of dinner...

Sunday I was back in bright and early for a game of X-Wing Miniatures: 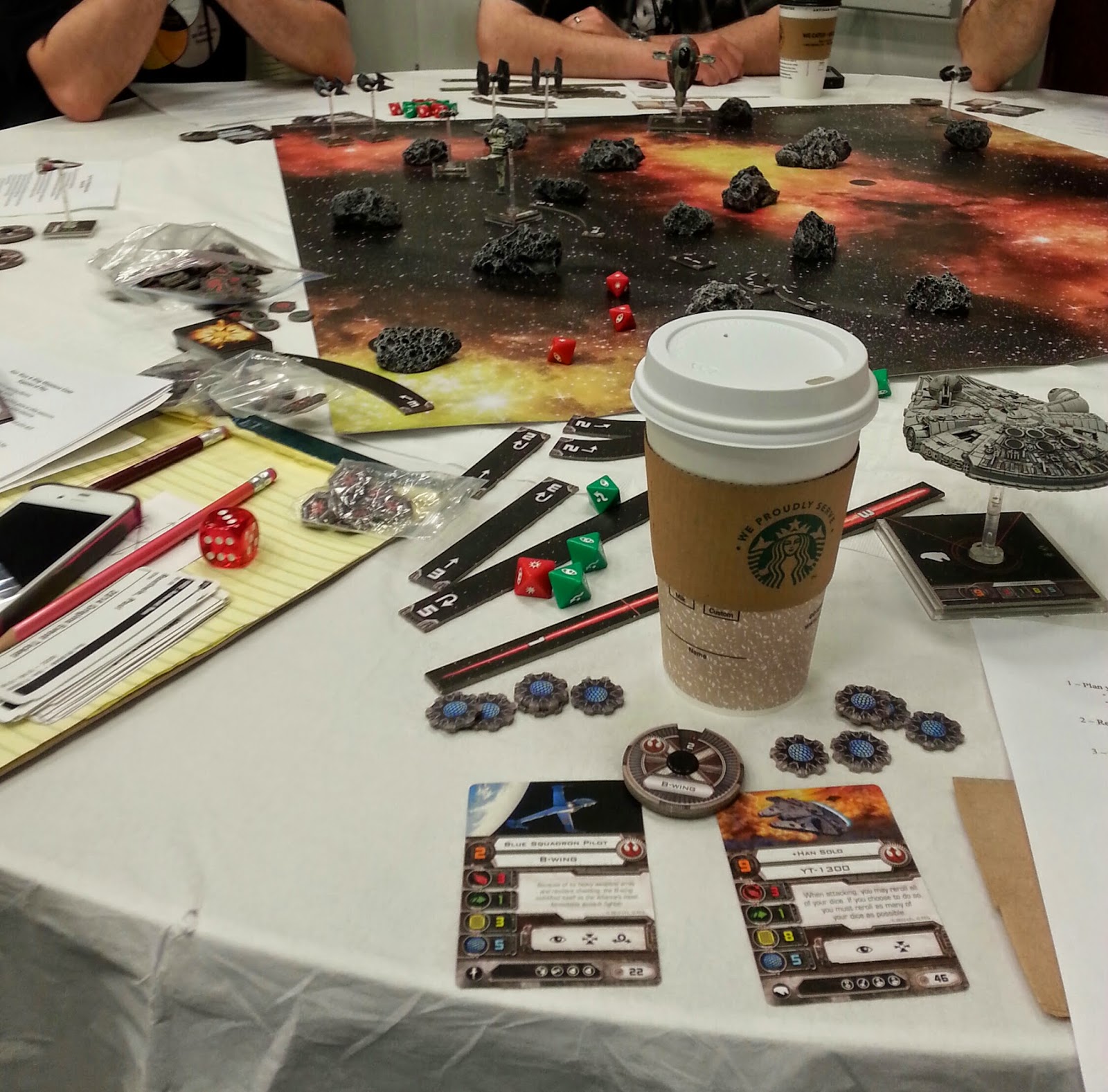 I've been both excited and apprehensive to try this game - excited because I'm a Gen-X male and it's frickin' Star Wars, people! And apprehensive because it looks like it could be waaaay too easy to drop a ton of money on.  Funderhammer & I have discussed this problem in the past: 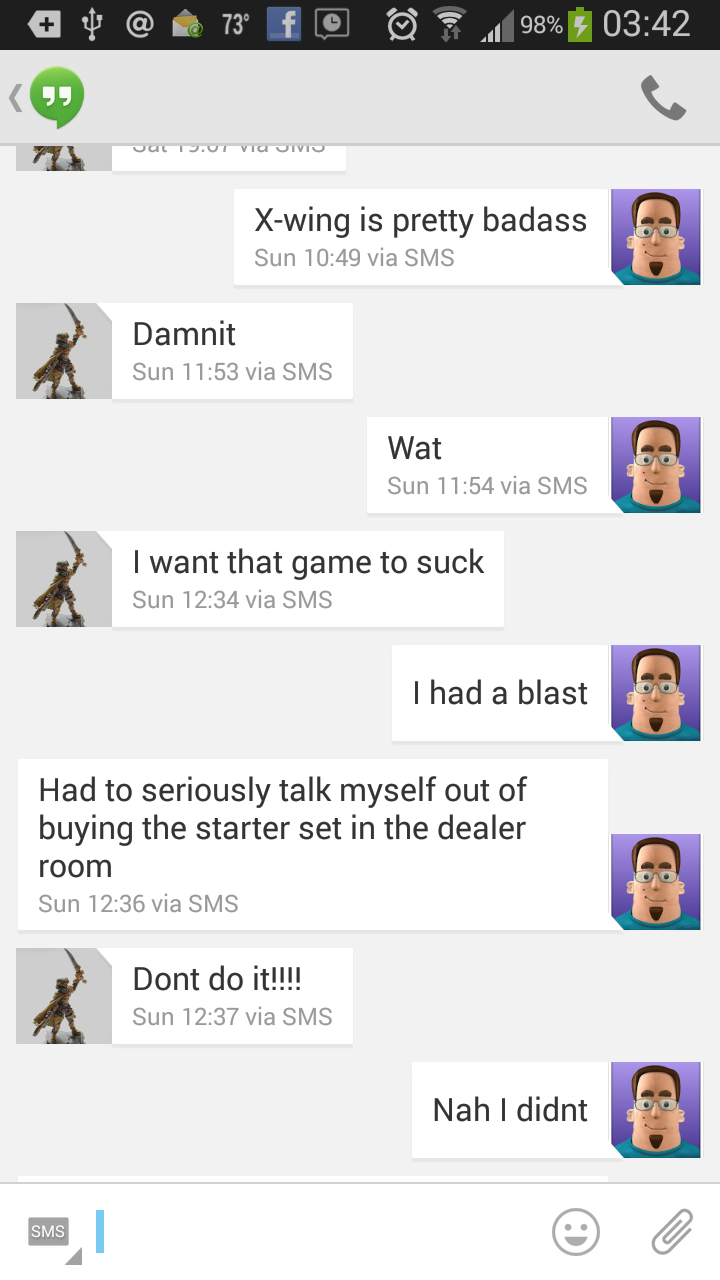 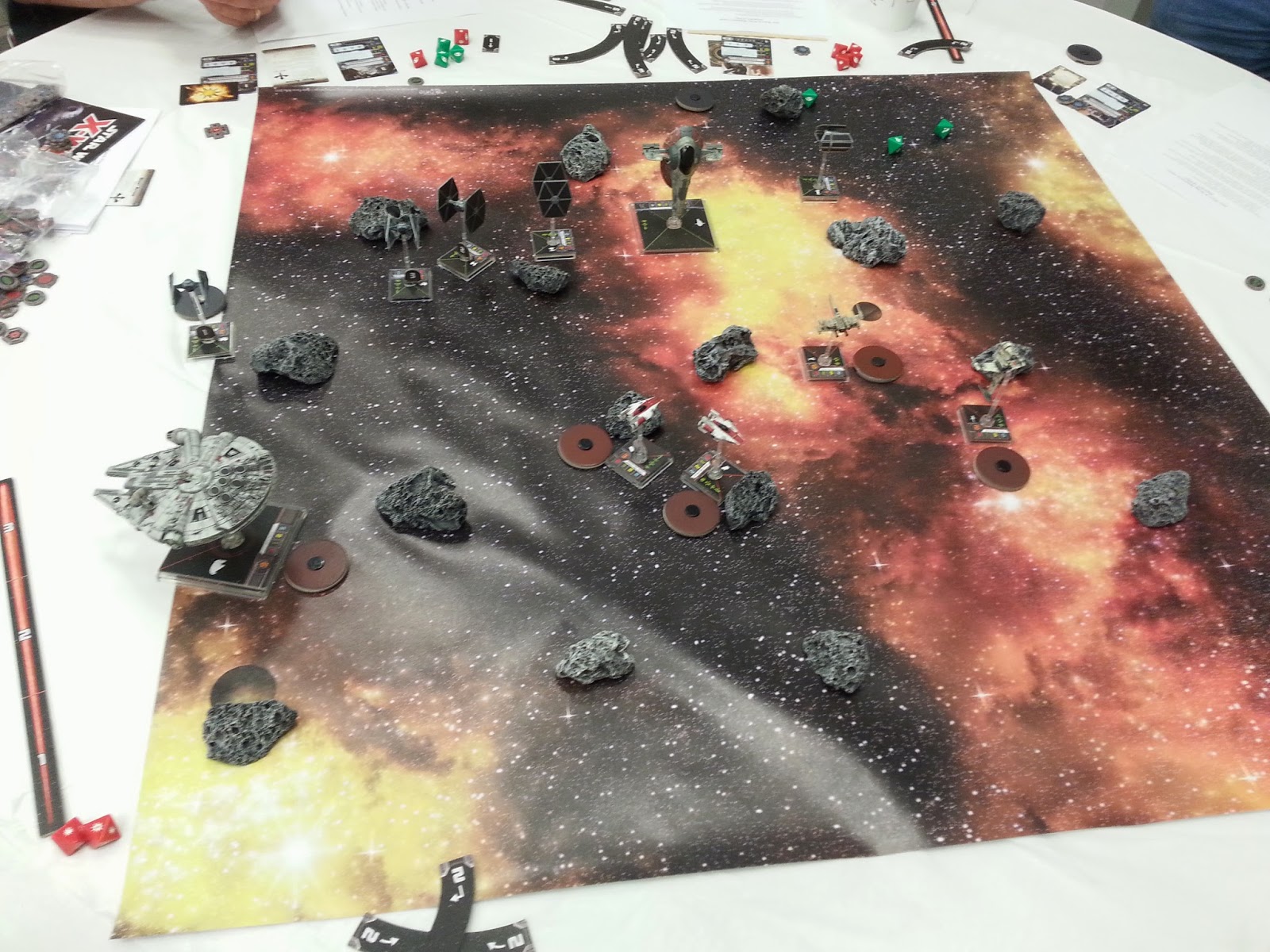 ...and I did have to talk myself out of buying the starter box in the vendor hall - the only thing that stopped me was that I checked Amazon and it was a lot cheaper there.  I think it is feasible to keep it to a modest investment, as long as you stayed with a few small ships per side, and didn't buy the Rebel Transport or any of the ridiculous-sized ships.  I've added a basic setup to my Amazon wish list, I'm hoping maybe Santa will come through this year...

After the game I made a final lap of the vendor hall (I didn't see anything I couldn't live without), grabbed some lunch, and headed home - another Origins in the bag!  See you next year!
Posted by BigPaul1e at 6:30 PM