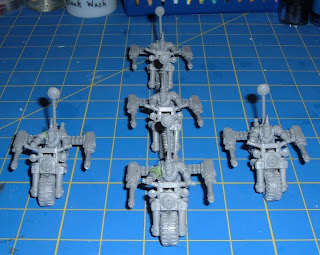 I built an Ork Warbiker Squadron the other day - it required a bit of converting that was born of necessity, but I was pretty pleased with how it turned out:

As I've mentioned before, I bought a huge lot of Orks from an ad on Craiglist, and most of them were in various stages of assembly. The warbikers were mostly assembled, but one of them had a broken handlebar, and this poor guy was missing an arm: 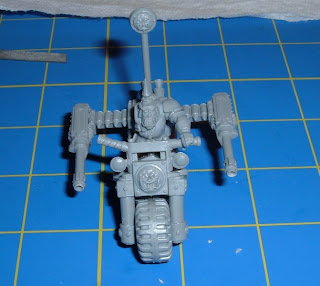 I dug through all my bits (which take up several decent-sized boxes at this point), but I had NO spare Ork arms. None. One of the advantages of when GW switched to mostly plastic kits is that they give you lots of extra bits for converting, but they're very good at picking one particular body part per army and not giving you any extras, lest you be able to build a single soldier for free. With Space Marines it was legs, apparently with Orks it's arms. Regardless, I had to come up with something - I dug through my bits again, and the only arm I had that was in a remotely similar pose was this one - I think it's from a Chaos Marine: 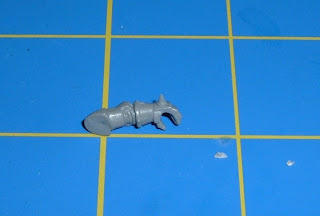 Several problems present themselves right off the bat: First, it's a human(oid) arm, so it's too short. It's a left arm, and I need a right. And the glove is all wrong.

I was looking closely at the hand, and the thumb is "centered" enough that I didn't think it would be especially noticeable if I switched sides, so I chopped it in half at the shoulder and flipped it around: 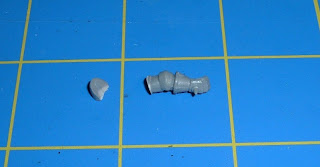 To fix the length issue, I shaved off the elbow armor, cut it in half at the wrist, and extended the arm with some Green Stuff: The other Warbikers are only wearing one shoulderpad (on the left), but I wasn't confident in my ability to freehand sculpt a large section of shirt, so I decided to give this Warbiker a shouldpad on each side (let's just say he's Seargant Ork, or something). I grabbed a spare Space Marine shoulderpad: 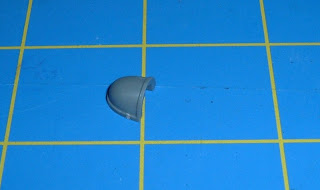 The Marine shoulderpad is way too tall, so I chopped a section out of the middle and glued it back together: 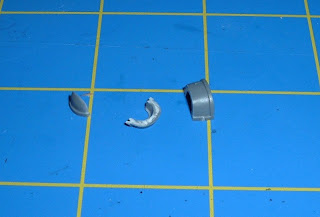 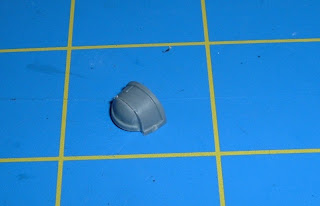 I gave it a bit of filing to smooth out the shape, remove the ridges from the sides, and taper the ridge along the bottom. Then I glued it on the arm: 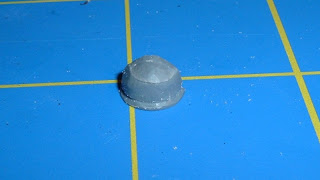 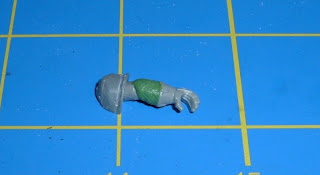 Next, I rolled out some Green Stuff into a thin sheet, cut out a small rectangle, and laid it on the arm to make the shirt sleeve: 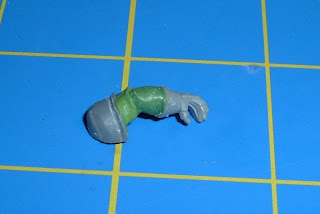 I then attached the arm to the model and glued it down, since the Green Stuff was still just a bit pliable at this point, so I was able to twist & position the arm without breaking it. I then rolled out a veeeery small "sausage" of Green Stuff and placed it at the edge of the sleeve, so I can eventually make the cuff of the shirt "flapping" in the breeze, to match the other side: 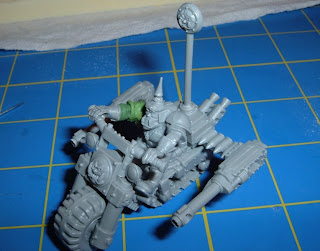 After letting everything dry overnight, it was just a matter of lots of careful filing with my jeweler's files to bring the forearm & shirt sleeve into the right shape, remove the unwanted details from the glove, cut the gusset vent into the glove's cuff, file the crook in his elbow, and to define the transition of the glove to the wrist. Overall I was pretty happy with how it came out: 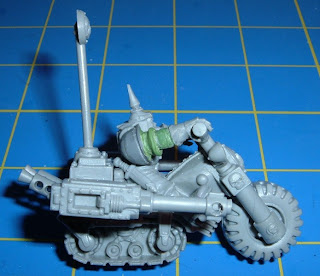 I used a thin coat of watered-down brush-on primer to fill any slight imperfections or filing marks: Here's a comparison of each side of the model:

I think that once they're primed and painted, it won't be noticeable at all. Just an FYI, I absolutely wouldn't have been able to pull this off without the techniques I learned from Joe Orteza at GenCon - if you get a chance to take one of his classes at a convention, jump on it!
Posted by BigPaul1e at 9:27 PM