So here's the results of of my custom bases project: 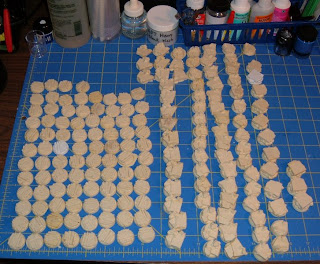 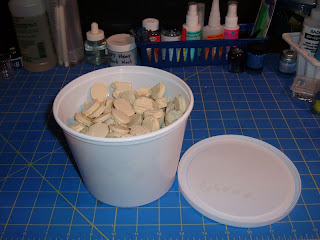 All-in-all I got 92 trench bases and 84 "urban wasteland" bases out of 28 ounces of resin - I originally calculated that I could get two-hundred-and-twenty-something. There were ten bases in my mold - the first few times I mixed way too much resin, I had a few castings that got ruined entirely due to a bad ratio / poor mixing, and every other batch or so I would have one bad base per casting. So, that works out about right. I plan on picking up another batch of resin for another project that I have in the works, and I'll probably use whatever is left to cast some more bases - but, I am seeing some degradation of the mold. It's partially because some of the bases I made would really be better suited to a two-piece mold and it's hard on the mold when I remove them, and partially because I wasn't super careful with the process every time - but, it is a consumer product, and the mold isn't meant to turn out industrial-sized quantities and last for years, like commercial-spec molds.

To help me get all these cleaned up & ready for painting, I picked this up today: 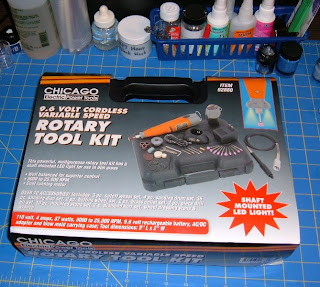 I already have a rotary tool, but it's around 12 years old and the batteries barely hold a charge anymore. I've also wanted one with the flexible extension for a while, to make it easier to do close-up work. Now I just have to build the figures that will go ON the bases...
Posted by BigPaul1e at 9:38 PM