The wife was out of town last week, so I spent a lot of time bored to tears, but I did get more work done on Space Hulk.  I pretty much just need to do the highlights on about half of the marines and I'll be done.  I did get together with lars4life over at Funderhammer one night and worked on some conversions - we'll have some pictures of a joint project up soon.  (We also have an idea for an interesting take on a speed-painting contest).

On Sunday I got together for our weekly D&D game, and had a blast: 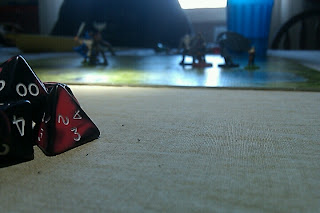 For the last few games in our campaign, our DM has adapted the Palace of the Silver Princess module.  Sunday's game involved tons of interacting with NPC's, bluffing, etc - you know, the stuff that gives "Role Playing Games" their namesake.  Sometimes these elements take a backseat in our rush to kill monsters and find loot (especially since we lost our player who tried to bluff constantly, and consistently had the worst charisma rolls of all time).  I felt this last game struck the balance perfectly.

Near the end of the game, our DM's wife & son returned home from visiting family.  The boy likes to sit in Dad's lap and help him roll dice when we play.  This time he decided he wanted to play with the minis (or "guys", as he calls them) - since we were still in the middle of combat, I suggested giving him his own set of dungeon tiles.  With Dad's collection of minis conveniently next to him, he was free to set up his own encounter.  Let's just say this kid's gonna be a brutal DM: 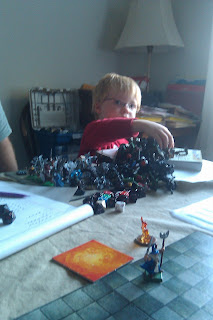