I was looking around for ideas on painting my Grey Knights army and found this awesome tutorial at DakkaDakka.  I was all fired up to give it a try, but lately Warmachine has been occupying the majority of my time, and I was pretty gung-ho about getting those models painted.  I took another class with Matthieu Fontaine at Adepticon this year, and I realized that by combining the color theory that Matthieu taught us with the techniques in the tutorial, I should be able to adapt the technique to my Khador force.  And, to be honest, I'm less concerned with the results with the Warmachine models - seriously, there are no "paint snobs" in the Warmachine crowd - half of those guys don't even have their models primed (sorry guys, but it's true!)
To start with, I gathered the three colors I would need for the airbrushing: 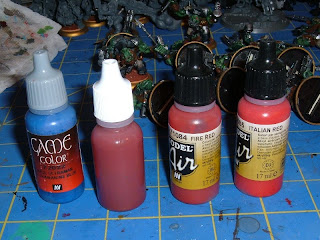 I'm using Vallejo Model Air paints, as they have proven to be the least finicky with my airbrushes, and I like being able to use them straight from the bottle.  I chose Fire Red as my base color, Italian Red as my highlight color, and made my shading color from Fire Red + a few drops of Ultramarine Blue.

Next, I gathered the models I would be airbrushing: 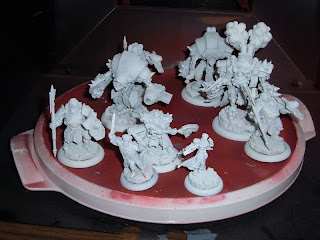 Pretty much everything in the army that will primarily be red.

Step one was to load my airbrush with the "shading" color, hold the model upside down, and spray from about a sixty-degree angle, which resulted in this: 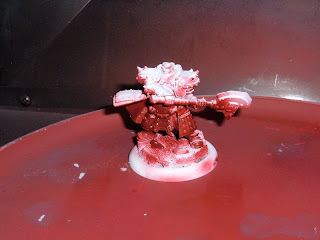 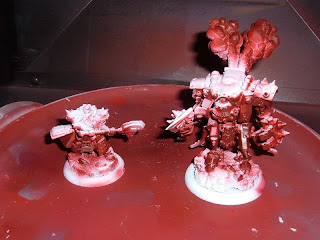 This gets all of the "low points" of the models covered with the darkest paints, where the shadows would be.  (I also painted the cinematic effects on Karchev's smokestacks in the above pic, as I needed that color as a base for those anyway).

Next, I loaded the airbrush with the Fire Red and, with the model right-side-up this time, sprayed from above, again at probably a sixty- or seventy-degree angle: 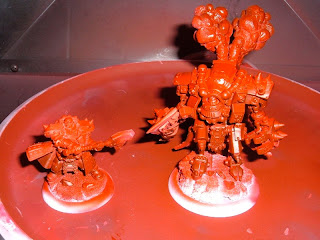 ...this gets the "main" color on the model, while leaving the darker color underneath & in the recesses.

Next, I loaded the airbrush with the Italian Red and sprayed from above at a more severe angle, probably closer to eighty degrees, and from a bit farther away: 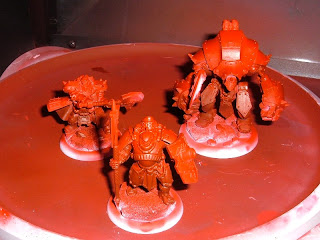 This gets the lightest "highlight" color on the highest points.  Here's a pic in the lightbox where it's a bit easier to see the effect: 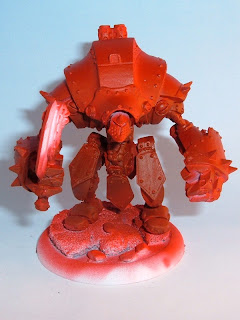 Now, I wanted to see if I could finish the above models to a decent standard fairly quickly - I grabbed the Juggernaut warjack and gave it a coat of Boltgun Metal on the axe, joints & rivets, Tin Bitz on the axe & shoulders, Chaos Black on the edges of the armor, and Fortress Grey on the base: 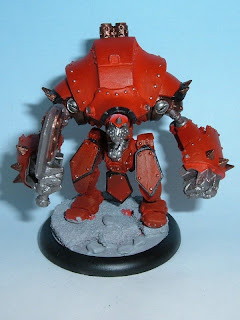 Next, I gave the axe, claws & base a wash of my APJ Black wash.  When that was dry, I gave the axe & claws a quick drybrush with Mithril Silver, and gave the exhaust stacks a bit of Forge World Black Soot weathering powder: 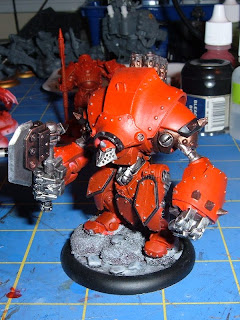 Last, I gave the model a spray with some matte sealer and added some of Secret Weapon Miniatures crushed glass snow effects and an Army Painter Winter Tuft as an accent: 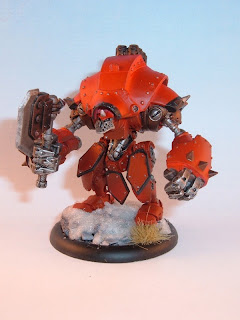 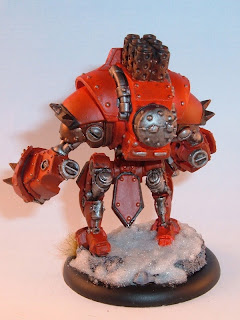 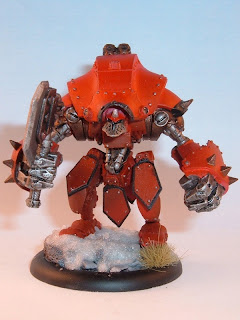 Overall, I'm pretty pleased with the result - the three pics above were taken with lighting only from the sides at table level, so you can see the shading effect of the zenital airbrushing technique.  The only unexpected thing that happened is apparently when I sprayed the model with matte sealer, it dislodged some of the weathering powder, which blew on to the top of the model.  (This was my first time working with weathering powders, I will fix them with mineral spirits before clearcoating from now on).  It only took about thirty minutes to airbrush all of the models, and probably another 30 - 40 minutes total to finish the above model, and that was mostly because I had to keep stopping to go look at a reference pic, since I'm not familiar enough with the Warmachine paint schemes yet to do it from memory.  This is definitely a technique I'll be using in the future...
Posted by BigPaul1e at 4:00 PM