After dealing with a ton of work & personal stuff and racing around to get caught up on chores, the wife & I were FINALLY ready last Wednesday to depart for GenCon 2011! We loaded up the car, dumped out a few huge bowls of food for the cats, and hit the road a bit before noon.  The drive to Indianapolis was uneventful, and we got to our hotel around 4PM: 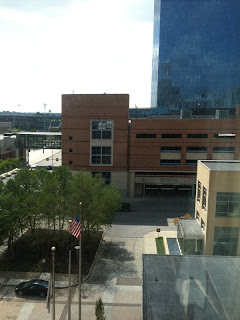 I was also glad to see that my Khador army made it to Indy unscathed: 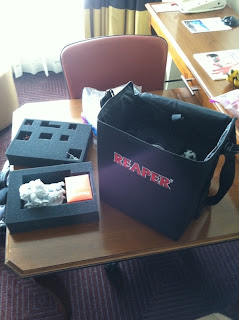 The wife & I weren't able to find any events Wednesday night that interested us (I didn't find out until later that there was open gaming at Union Station on Wednesday evening) so we decided to have a nice dinner out.  My wife had been saving our credit card reward points for the better part of a year, and we were able to get quite a few gift cards for Ruth's Chris Steak House: 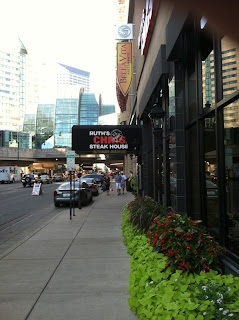 I knew it was going to be expensive, but I have to say it was one of the best meals I've ever had.  I had the Kobe filet: 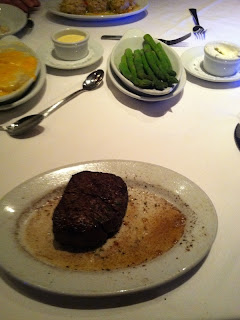 And my wife had the crab cakes: 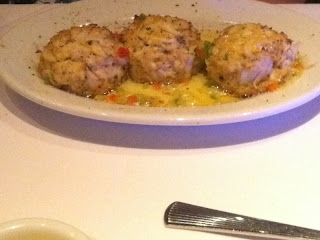 After dinner, my wife & I headed back to our hotel to relax.  While checking Twitter, I noticed a tweet from Screaming Heretic: 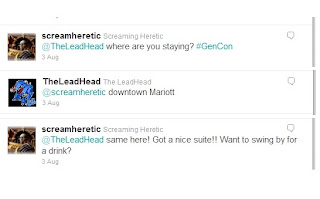 ...so I jumped on the elevator and met Joe and The Jen from the podcast in their suite. Joe & I talked about D&D, podcasts, blogs, 40K & Warmachine for a few hours - in the process, I'm pretty sure we re-wrote the rules for all the cheesy units in 40K, figured out how Games Workshop could increase profits while charging 75% less, and solved the current global financial crisis.  Unfortunately we polished off a bottle of Sailor Jerry while doing it, so I don't actually remember the specifics.  (Oh well, there's always next year).  At one point we went downstairs and ran into Mack Martin, formerly of the Dice Like Thunder podcast, and now with Fantasy Flight.  The first word's out of Mack's mouth were "WE GOT THE STAR WARS LICENSE!" referring to Fantasy Flight's announcement from a couple of days earlier.  After chatting with Mack for a minute we headed back upstairs and hung out for little while longer - the Screaming Heretic folks had to be up at 7AM & the wife was texting me wondering where I was, so I said my goodbyes and headed off to bed.

On Thursday morning the wife & I woke up and had a bite to eat.  I had some events that I registered for later than the others, and had to go to the will-call desk at the Convention Center to pick up the tickets.  I had heard rumblings on Twitter that the will-call line was really long, but I had no idea until I got there: 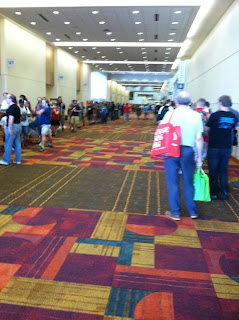 It's hard to get a sense from the picture, but the will-call line started at the desks at one end of the convention center, ran down THE ENTIRE LENGTH OF THE CONVENTION CENTER, then doubled back on itself and ran THE ENTIRE LENGTH OF THE CONVENTION CENTER AGAIN. And, of course, I got stuck in line next to the guy who decided to bitch about it, loudly, THE ENTIRE TIME.  I decided I was going to kill somebody or lose my mind, so to occupy myself I logged in to my Twitter account and invented the "GenCon Will-Call Line Game" 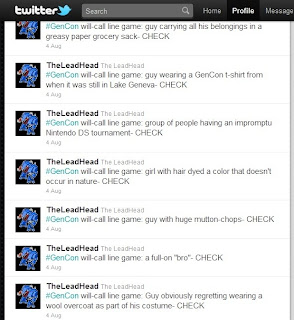 Needless to say, it appeared to be a hit: 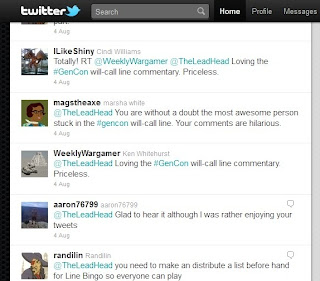 After almost two hours in line, I finally arrived at the will-call desk: 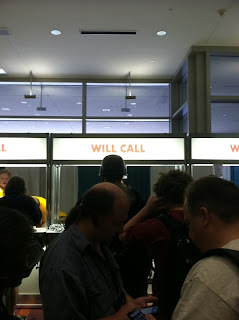 I grabbed my tickets and sent a text to my wife to grab my backpack and meet me at the Convention Center.  She showed up a few minutes later, and we and headed to the Indiana Convention Center for our first event, Crokinole: 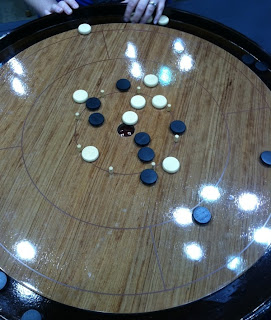 If you've never played Crokinole, it's kind of like a cross between horseshoes and shuffleboard, played on a tabletop by flicking wooden discs on a waxed wooden playing surface.  We first played it at GenCon last year and had a lot of fun, so we decided to play again this year.  I actually had halfway decided to buy a Crokinole board at the con, but Mayday Games wasn't there this year.  (This actually turned out to be a good thing, as there was absolutely no way I could have fit the thing in the car on the way home).

After Crokinole, I headed to my next event, Death Angel: The Space Hulk Card Game: 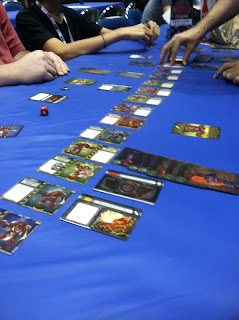 I had actually just bought this game a couple of weeks earlier during a sale, but hadn't had a chance to play it yet - it turned out to be a lot of fun!  I was a little leery as I'm usually not the biggest fan of card games in general, but I think it would be more accurate to describe the way this game plays as a "board game without the board", and it really does capture the feel of a game of Space Hulk.

After Space Hulk I met back up with my wife and headed to the food court for lunch: 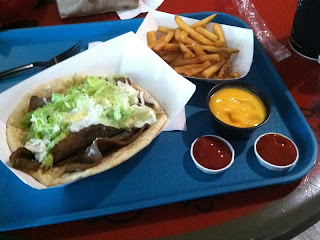 After lunch, I made my first lap of the Dealer Hall.  My first stop was the booth for The WarStore, where I bought almost the last of the models I need for my Grey Knights army: 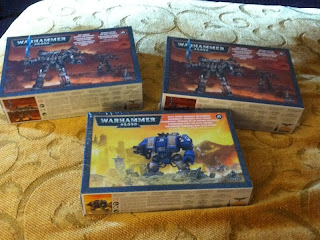 Two Dreadknights & a Venerable Dread.  All I need now is an Inquistor Karamazov, and I haven't been able to find one of those since he's slated for a re-release in Finecast next month.

Next I went by Days of Wonder's booth to pick up a copy of the only Memoir '44 expansion I didn't own yet, Winter Wars: 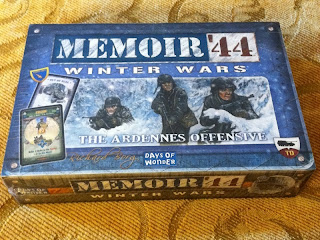 I had really wanted to get this at Origins this year, but Days of Wonder wasn't there.  When I first went to their booth at GenCon I didn't see any copies on their table - I asked the lady working if they had any, and she started to shake her head no, but said "wait a minute" and dug around under the table - she came back up with a copy and said "I put this aside because I thought we might need it for demo games, but I'll sell it to you".  Score!  I would have been really disappointed if I hadn't been able to pick this up.

Next, I stopped by the WizKids booth to pick up a copy of Quarriors: 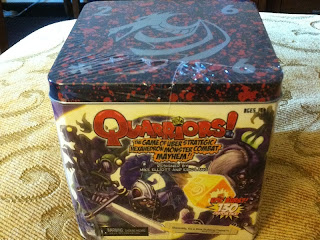 This is a "dice-building" game - think "Dominion", but using dice instead of cards.  I haven't had a chance to play it yet, but everyone I've talked to raves about it, so I decided to give it a shot.

At this point my wife had joined me in the dealer room and we decided to go back to the Days of Wonder booth and pick up Ticket to Ride: 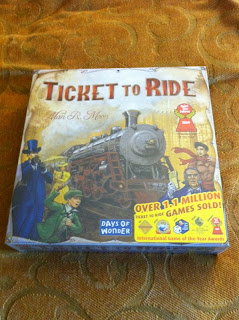 We both like train games & have some friends who have expressed interest in them too, but all we had in our collection was Empire Builder, which isn't the most "n00b friendly" game, takes a long time to play, and, to be frank, is kinda ugly - Ticket to Ride is supposedly a more streamlined system and looks great, so I'm hoping it fits the bill.

After the dealer room we went and grabbed some dinner, and I headed off to my first painting demo, "Painting Faces of Miniatures".  There was some good info in this class, but unfortunately nothing I didn't know - it's all about patience & practice!  After the class I headed back to the room, relaxed for a bit, and went to bed early, as two days of long hours & greasy food had kind of caught up with me...

The next morning the wife & I headed back to the convention center for our first game, Nuns on the Run.  We first played this game a couple of years ago at Origins and really liked it, but we hadn't played lately, so we scheduled it - most of the players are "novices" (basically "nuns-in-training") and are trying to sneak around the Abbey to obtain their "secret wish".  One player controls The Abbess and The Prioress, who are trying to catch the novices in the act and send them back to their rooms before they can achieve their goal.  It's a fun game that uses a unique mechanic of not being able to see where everyone else is on the board (you record your location & moves on a score card) unless The Abbess or The Prioress get close enough to hear you sneaking around.  You can move faster, but then you risk making more noise and getting caught.  Overall it's a light, fun game that I highly recommend!

Next, we played Dominion.  (Sorry for the lack of pics, I wasn't really thinking straight on Friday, apparently).  I had played this a couple of years ago at Origins and really liked it, and I thought the wife might enjoy it too.  We got paired with a couple of really experienced players, but luckily they were really nice guys who were happy to play with just the base game and show us the ropes as we played.  Of course we finished in 3rd & 4th place, but all the scores were within three or four points of each other, so we didn't do too bad.

After Dominion, I ducked back into the Dealer Room and grabbed my GenCon t-shirt before they sold out: 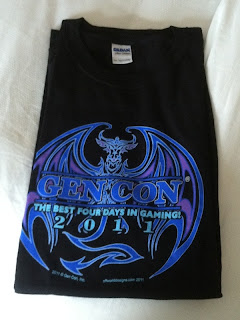 I stopped by the Fantasy Flight booth, where they had display cases showing their upcoming releases - one in particular caught my eye, Wiz War: 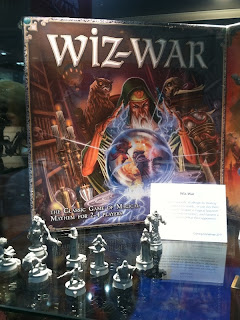 Wiz War is fun game where player negotiate a maze collecting treasure & fighting monsters.  The trick is that the other players have items that can spawn monsters, trigger traps, or even rearrange the maze itself!  Wiz War was first published almost 30 years ago, and the license has been kicked back-and-forth and tied up forever - gamers desperate to play have taken to printing their own copies or  creating elaborate 3-D game boards using Hirst Arts molds.  I'm really excited that Fantasy Flight now has the license, and this game will definitely be on my Christmas list!

Next,  I wandered by the Rio Grande booth, and noticed they were having a pretty good sale - Puerto Rico, which has been on my shopping list forever, was on sale, as well as all the Dominion expansions, so I picked up Seaside: 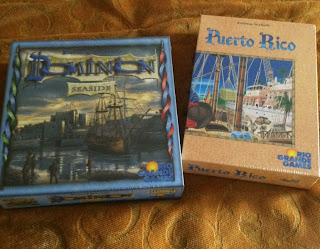 About this time we decided to go to dinner - we headed to The Ram Restaurant & Brewery, which is a GenCon institution.  Every year they partner with Privateer Press and re-theme the entire restaurant as a gamer mecca, as well as offering some very cool merchandise.  Unfortunately they were packed and it would have been a huge wait for dinner, so I just grabbed the 2011 t-shirt and a "growler" (a refillable 64-ounce jug that they sell their microbrews in): 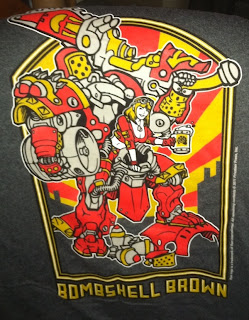 Hey, it's even Khador, my faction of choice!  We headed back to the hotel and tried the restaurant there, the Circle City Bar & Grille.  We were pleased to find that they were offering a special menu with "fantasy themed" meals like "The Feast" (an assortment of meats, cheeses, and hunks of bread) and "The Beast" (a gigantic bratwurst).  I just got a plain 'ol turkey club, but my wife opted for "The Bird" from the special menu, and was served an impossibly huge drumstick on a giant pile of mashed potatoes: 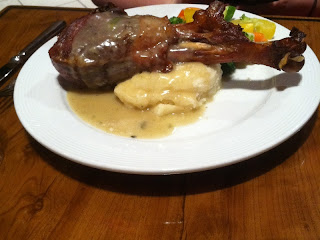 Needless to say, watching her try to eat this thing was entertainment in its own right.  After dinner, my wife headed back to the room and I head off to another painting seminar, "Bloodly, Bloody Minis" with Michelle Farnsworth.  Michelle showed us some really cool techniques for rust: 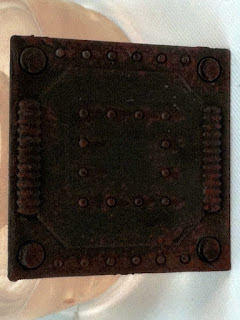 ...and for blood effects: 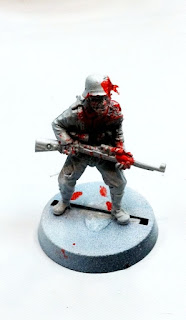 After the class, I headed back to the hotel.  As the wife & I were getting ready for bed, we noticed there were fireworks going off over Lucas Oil Stadium, which we could see from our hotel room - we turned off the lights and enjoyed the show: 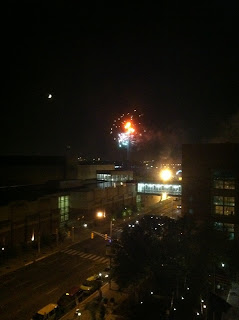 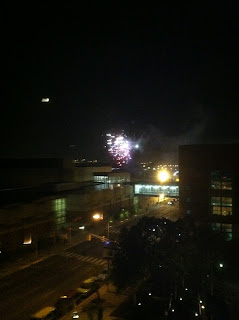 After the show, we hit the sack.  Part II still to come!