On Saturday the wife & I both overslept - we had a game of Carcassonne scheduled for 10AM, but missed it.  We decided to take it easy for most of the day - we went out exploring around Indianapolis a bit.  When it came time for lunch, we wandered over to the Hyatt-Regency and went to One South, which was completely deserted: 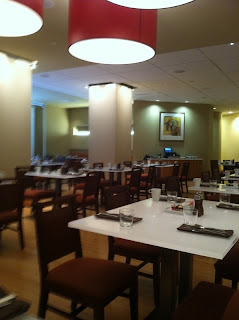 This was actually one of our best meals of the trip - I got the Italian beef sandwich, and my wife got the pastrami: 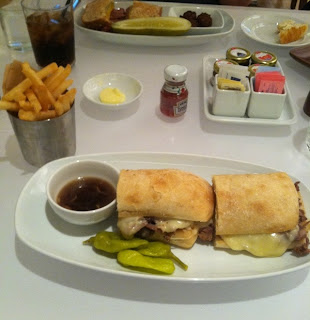 After lunch, we headed back to the hotel and spent an hour or so in the pool & hot tub.  After a bit, I headed back over to the Dealer Room to see what trouble I could get into - I actually had some money burning a hole in my pocket, as there was a quite a bit of stuff that I was planning on buying that wasn't available; as I mentioned before, I wasn't able to get a Crokinole board, and nobody had an Inquisitor Karamazov model available.  I had been considering Descent or Twilight Imperium from Fantasy Flight, but didn't see copies of either at their booth.  I had expected Super Dungeon Explore from Soda Pop Miniatures to be available at the show, but it was still a pre-order only.  I stopped by the Catalyst booth to get a copy of Levithans, but it wasn't out yet either.  Eventually I wandered by the Battlefoam booth - I had picked up a P.A.C.K. 216 at Origins to organize all my paints & tools, but I had a few dozen that wouldn't fit - I decided to pick up another one: 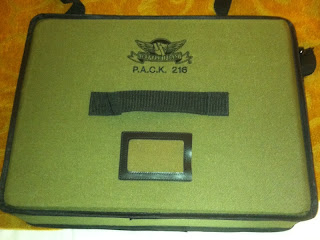 I originally requested two of the trays for Vallejo/Reaper paint bottles,  as I've been moving more towards Reaper paints, and one P3 tray instead of the tool tray that is usually included with the 216 - they were sold out of the P3 trays and offered to ship it to me, but instead I decided to go with a pluck foam tray, as I really don't see myself winding up with 50 bottles of P3 paint (I have over 150 colors of GW / Vallejo / Reaper / P3 / Rackham paints already).  With the pluck foam, I can customize it to carry all the "miscellaneous" bottles into one tray.  I also almost talked myself into buying a P.A.C.K. Mini, just because every time I look at one I think of a thousand uses for it. but decided to hold off for the time being.

Next I headed to my only painting event of the day, Painting Non-Metallic Metals: Practice and Theory with Zach Lanier.  This was by far the stand-out seminar of the convention for me - I always intend to try painting non-metallic metals, but I've always wound up getting intimidated and just using metallics and a wash.  Zach laid out the process in a very logical, easy-to-understand manner, and I feel much more confident about giving it a try.  We had some time left over at the end of the class, and Zach was able to give us a demonstration: 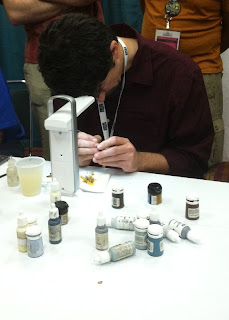 He also let us drool over his collection of award-winning models: 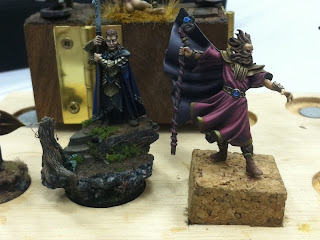 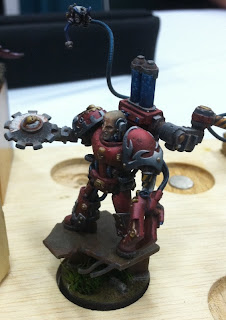 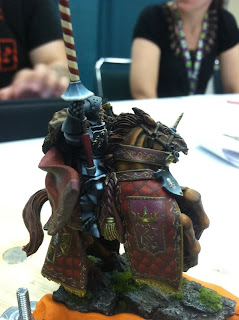 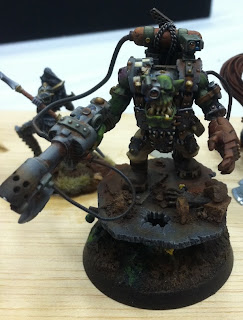 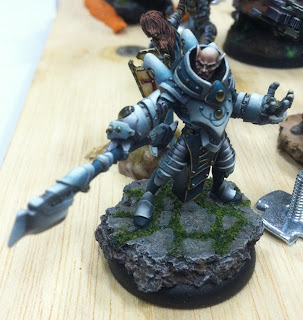 After the seminar, I decided to head back to the hotel room - I actually had a ticket to play in the Privateer Press Iron Arena, but was feeling pretty beat, so I cashed the ticket in and went to get some dinner with the wife...

On Sunday the wife & I woke up early and got everything packed up and loaded into the car, since we had to check out of our hotel by 11AM.  We moved the car to the parking garage at the Circle Centre Mall and headed in for our last day of Gencon. 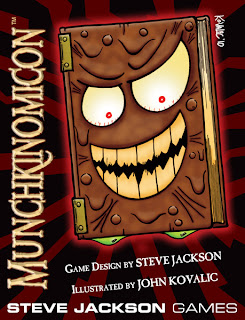 This went exactly as a game of Munchkin should, with everyone progressing pretty much equally until someone got to level 9, then everyone would team up and deliver a beatdown to said player.  Me & another guy got pretty close, but he won in the end (actually because another player didn't have anything to play besides an "all clerics go up a level" card - most unsatisfying loss ever). After this game, the wife told me "If you want to go to the Dealer Room, this is your last chance."  Of course she didn't have to tell me twice!  I swung back by the Battlefoam booth, as by this point I had talked myself into the P.A.C.K. Mini: 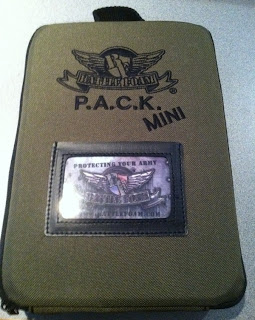 I also swung by the Reaper booth, as I wanted to pick up a set of their awesome Mousling figures: 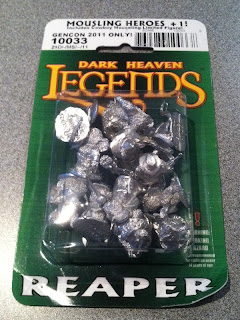 They also had a pretty good deal on a GenCon-exclusive "basic colors" paint set - I picked up one of these, as I'm going to be replacing my GW & Vallejo Game Color paints with Reaper & Vallejo Model Air as they run out.

After the final lap of the dealer room, we went to the mall and grabbed some lunch, then hit the road - another GenCon in the bag!

-As I said, there was a lot of stuff I wanted to buy that wasn't available, or companies that weren't there - really, guys? You're going to skip GenCon?

-The layout of the Dealer Room was kinda screwy - there were whole areas I think I missed because the layout was weird.

-The swag bag was a slight improvement this year - it included a Magic deck, True Dungeon token, a full retail copy of Rift (strange choice, but whatever), and a coupon for a free D6 from Crystal Caste.  (At Origins, and at  previous years at GenCon, they just threw a D6 in every bag - this year, you had to go to the Crystal Caste booth & redeem the coupon.  I didn't bother, since the GenCon die was identical to the Origins die this year).

-The Fantasy Flight booth was awesome.  The Wizards of the Coast booth kinda sucked.

-I didn't get a chance to check out Space Marine, because the booth was hidden in one of the weird pockets of warp-time in the Dealer Room.

-It was kind of nice to see WizKids with a substantial convention presence again.

-The new spaces at the Indiana Convention Center are nice, but since they didn't use a lot of the old space (the entire Exhibit Hall "D", several of the ballrooms, etc.) the con actually felt more crowded than in past years.

-If you bring a rolling suitcase or stroller into the Dealer Room, we should legally be allowed to kill & eat you.

...and that's about it for GenCon 2011 coverage.  That puts and end to all the "major" conventions of my season, but I'll be going to at least one more regional convention this year!