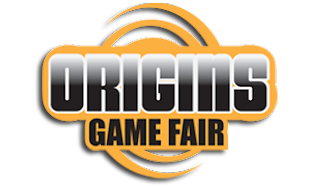 On Friday, we got up early again, went out for breakfast, and headed into the con.  All of us headed into the Dealer's Room and I headed to the Mayfair Games booth - they were giving out some pretty cool cloisonne pins: 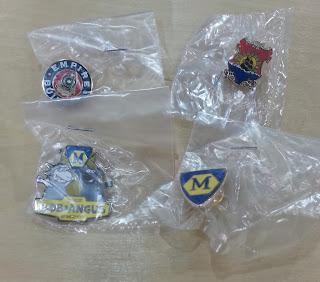 (It was two pins per attendee, but I whined until my friends gave me their doubles).  Soon after, my wife & her friend got sucked in to a demo of Cheap Shot at the Gut Bustin' Games booth - I think my wife has bought a game from them every year at Origins.  Their games are extremely silly and light, but lots of fun - the best way to describe Cheap Shot is "Rummy with 'yo' mama' jokes".

Next, I headed to the Catalyst Game Labs booth and made my first big purchase, a copy of Levithans: 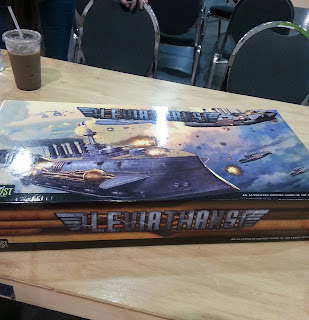 Leviathans is a fleet-combat miniatures games with a steampunk theme - basically flying battleships.  I first played Levithans at GenCon several years ago when it was still in development and was just paper cutouts - I tried to buy it the next year, but the shipping container didn't make it from overseas in time for the show.  This year I grabbed a copy, and it looks beautiful - it rivals the Fantasy Flight "coffin-box" games for quality. I'm looking forward to doing a complete write-up on this one in the future.

Next, I headed to the Z-Man Games booth and grabbed a copy of Pandemic: On The Brink: 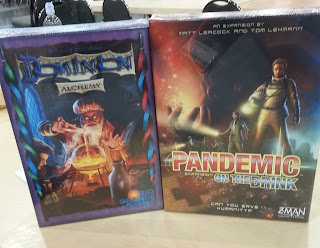 I tried to buy this last year, but all the Pandemic stuff was out of stock due to a new version being printed.  The parts in this expansion are really cool (little petri dishes with "disease" labels).  I need to dig out my copy of the base game, because you need to affix a sticker to the original board for the expansion.

Next, I went by the Rio Grande booth and bought the copy of Dominion: Alchemy shown above - I really like Dominion, and have been meaning to start pickup up all the expansions, but so far Seaside is the only one I have - Alchemy was on sale for crazy cheap, so I decided to grab it.

We took our purchases to the car and headed to The North Market for lunch, where we ran into a big group of friends.  While we were eating, I saw the man himself, Kevin Sorbo heading in for a bite.  He's shorter than I expected.

After lunch we headed back to the Board Room to play some games.  We started out with Ticket to Ride: Europe: 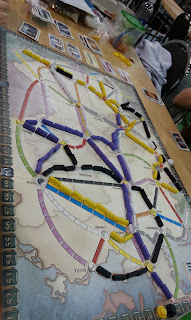 I love the original Ticket to Ride, and I'm pretty good at it (thanks to obsessively playing the phone app version of it), but I didn't like the Europe variant that much - I didn't grasp the "passenger" mechanic until pretty late in the game (by then it was too late to do me much good), and it's surprisingly hard to plan your routes when you're completely unfamiliar with the cities - you have to spend five minutes at the beginning of every turn making sure you know where you're going.  I'm sure it would get easier with more plays, but I'll stick with the original for now.

Next, we played a few rounds of Zombie Fluxx: 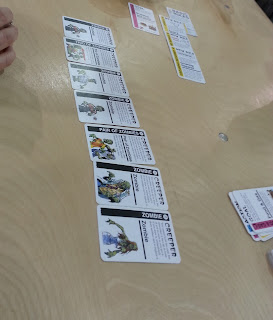 My wife with an impressive collection of creepers by round 3

The Fluxx games are a favorite of ours, and our friends caught on quick.

After my wife kept insisting we play Clue (which frankly isn't that good, and I don't come to gaming conventions to play games that you can buy at any K-Mart) we talked her into trying Kill Doctor Lucky, which we thought would scratch the same itch, but be a bit more challenging/enjoyable: 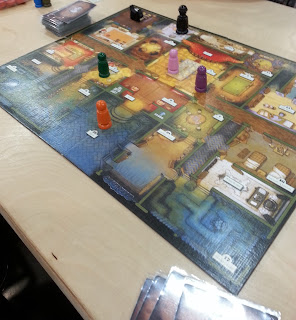 ...luckily, we were right - we wound up playing two games, and added the ...and His Little Dog, Too! expansion the second time: 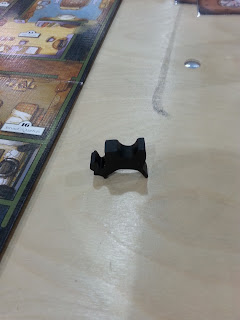 Funderhammer was the runaway winner of the Doctor Lucky games, and his celebratory antics might have seemed a bit... strange, to some people: 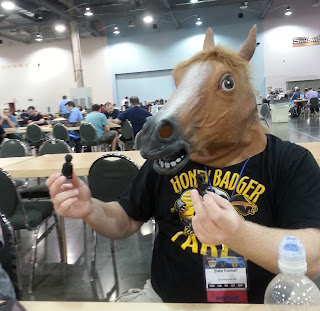 You feelin' okay, bud?  You sound a little hoarse...

After this we tried to play Carcassone, but the CABS volunteer gave us a different version - this was the "City" variant that none of us were familiar with, and we tried to muddle through it, but it just wasn't working.  We decided to take a break and make another pass through the dealer room.

I stopped by the Offworld Designs booth to pick up my official con t-shirt, and decided I also needed a cool way to display the Mayfair pins I got from their booth: 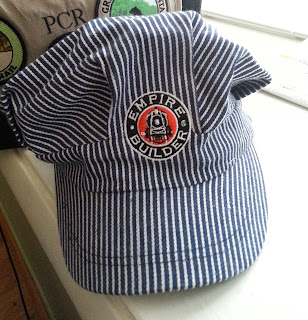 I stopped by the Chessex booth to take advantage of their "cup 'o dice" deal, then Funderhammer & I headed to the Q-Workshop booth, where I picked up a really cool leather dice cup with Dwarven runes: 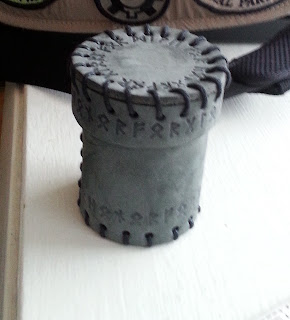 Funderhammer's fiancee was buying him Warmachine faction dice, and my awesome wife saw them and decided to get me a set, too: 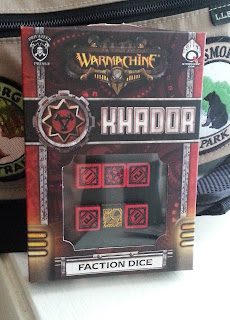 Next we headed over to the artist's area, and my wife found a print at the booth of one of our favorite artists. Mike Bocianowski.  On the way out, I stopped by the Cheapass Games booth and grabbed a game: 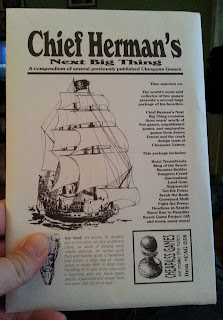 After dropping our purchases off at the car, we headed over to the Mongolian barbecue for dinner: 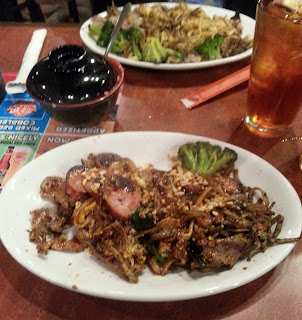 The food was great, but we were right next to the grill during the dinner rush, and couldn't hear ourselves think.

Afterwards we considered heading back in to the con, but we were all pretty tired, full, and broke, so we decided to call it a day.  Another Origins in the bag!
Posted by BigPaul1e at 6:00 PM

Email ThisBlogThis!Share to TwitterShare to FacebookShare to Pinterest
Labels: Board Games, Conventions, Origins