Everybody Into The Pool! 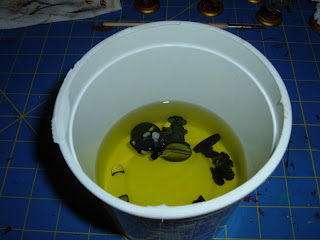 ...so I decided to start stripping the paint from the Black Templars I bought - looking at them closely, it seems that some of them were just primed black over top of an old paint job.  While the popular choice for this is usually Simple Green, I was listening to 40K Radio a few weeks ago and one of the guys recommended a product that is available at the Dollar Store, with the unfortunate name "L.A.'s Totally Awesome": 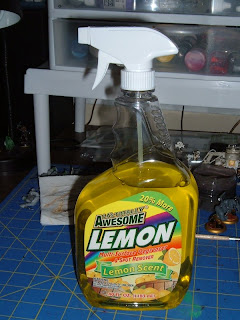 I decided to give it a try, since Simple Green is kinda pricey, and there's a "Dollar Tree" store near my house.  I have to say, I'm not impressed - I started out with a 50/50 mix of cleaner & water, but after a couple of days it didn't appear to be affecting the paint at all.  I gradually added more cleaner, until the mix was probably around 80% cleaner.  Here's the models after they soaked the better part of a week and were given a scrubbing: 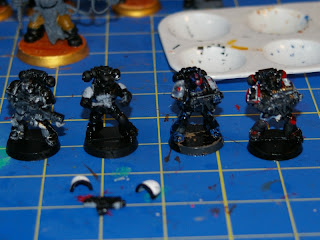 Well, that's just not gonna work.  To appease the modeling gods for my attempt to cheap out, I ran out and picked up some of the good stuff: 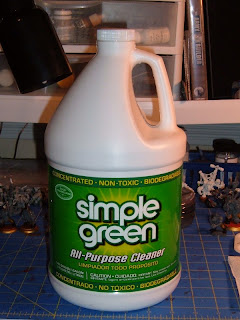 ...I went ahead and bought a gallon jug - it was $5.99 for a 24-ounce bottle, and I knew I would need at least two bottles.  The gallon jug was $16, so it comes out to almost exactly half the price per ounce.  (It also happens to be a great household cleaner, so I can use the leftovers for that).

Here's some of the same models after just 24 hours in the Simple Green: 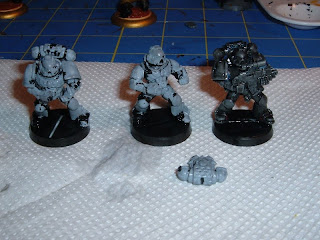 ...the paint just comes off in sheets, without a mark on the plastic.  A little bit of work with a toothbrush & a dental pick for the hard-to-reach spots, and these models will be ready to convert & primer.  So, I guess the lesson here is sometimes it's better not to cheap out, and just do the job right the first time...
Posted by BigPaul1e at 4:00 PM