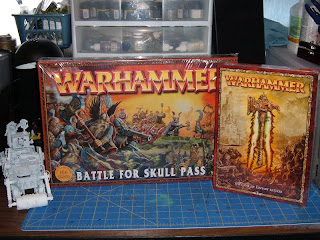 ...so where I work, November & December are great if you want to pick up overtime - everyone is using their vacation time to attend holiday parties & family get-togethers, or to vacation in warmer locales.  On top of that, we were down two employees in my department, due to one retirement and one transfer - Since mid-October I don't think I've worked less than 55 hours per week, and there were couple weeks where I almost hit 70 hours.  But, I've been here before, and it's quite a shock when January rolls around and I'm back to my regular 40-hours-per-week paycheck.  So, since the Christmas shopping was done, the bills were paid, and I still had a little extra money in my pocket, I swung by my FLGS a few days before Christmas, figuring I'd pick up a few models to squirrel away for the upcoming lean times.

When I got there, I found the place pretty picked over by holiday shoppers - they didn't have a single Ork or Black Templar / Space Marine model that I wanted in stock.  I'd given the Island of Blood fantasy boxed set a look a few times in the past, after 8th edition came out.  They were sold out of those, too - while I was chatting with the owner, I picked up a Battle for Skull Pass set he had left over and was giving it a look.

FLGS Owner:  You realize that's the old set, right?
Me: Yeah.  What are the armies in the new set?
FLGS Owner: High Elves & Skaven.
Me:  Hmmm, I think I'd actually like Dwarves & Goblins better... but the rulebook would be out-of-date, right?
FLGS Owner:  Yeah, but I tell you what... if you want that set, I'll sell it to you, with a full-size 8th edition rulebook, for the same price as the new boxed set.

Needless to say, I thought that was a heck of a deal, and I jumped on it.  But fear not, readers - I haven't gone to the darkside, and remain focused on 40K.  This is a back-back-burner project for a rainy day, for after I've finished the two 2,000-point 40K armies I currently have in progress...
Posted by BigPaul1e at 4:00 PM

Email ThisBlogThis!Share to TwitterShare to FacebookShare to Pinterest
Labels: Fantasy