New Board Game: Merchants of the Middle Ages

I found a pretty good deal on Tanga the other day: 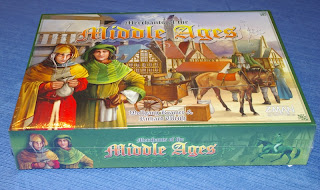 (For those of you unfamiliar with Tanga, it's a "one-deal-a-day" site, similar to W00t, but frequently features board games).  Recently a flood of titles from Z-Man Games, one of my favorite publishers, began appearing on Tanga - apparently Z-Man has been sold to French publisher Filosofia.  (Not too worry, word on the street is that Zev is staying on as an employee, and availability of titles shouldn't be affected much).  Merchants of the Middle Ages is one of the better-reviewed Z-Man titles, but Settlers of Catan is the only game most people think about when it comes to the "resource control"  family of games.  The game is beautiful and the pieces look to be high-quality, I look forward to playing it!
Posted by BigPaul1e at 4:00 PM