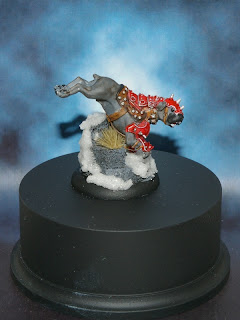 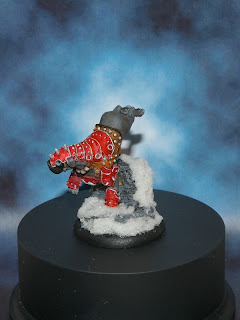 As I mentioned previously, the War Dog is cool attachment for your warcaster that pretty much lets him move wherever he wants, without having to worry about free strikes.  I modeled a drop-off on the base, so he looks like he's jumping down off a ledge  This is because the pose looks kinda silly if he's on flat ground - I see what the sculptor was going for, and I appreciate a dynamic pose as much as the next guy, but it just looked odd - like he was doing a one-legged "paw stand".  Some readers commented on the previous post and asked about converting the dog to different pose - I think this would be really difficult, as the way the back legs are positioned would require major re-sculpting.  (Not that I'm not up for a challenge, but I was in a hurry to get him table-ready, so I went with this solution).
Posted by BigPaul1e at 4:00 PM